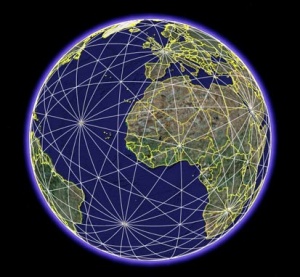 Ley Lines are the meridian axiatonal lines or grid system that conducts and transmits frequencies throughout our bodies and the planet. They are an exact mirror as they exist in our personal holographic template and are reflected from within the larger mirror of the planet’s own meridian and template system. (This is one way to describe our micro and macro system of nested holographic energy templates or the 12 Tree Grid that generate within an infinity spiral of ever expanding spinning fractals.)

Axiatonal Lines create the macrosystem energy network in the Lightbody where all dimensional frequencies are transduced into the meridians, chakras and etheric nadial structure. Ley Lines run the same energetic network into smaller tributaries in the microsystem. (This is similar to understanding the difference between an arterial vein and a capillary vein functioning in the same human circulatory system.)

The same energy network Axiatonal Lines that are present in the personal Lightbody and the 12 Tree Grid is also interconnected to the larger planetary axiatonal lines. The larger planetary body has an energy network which is an exact replica of our personal energy network and this expands throughout the unified field of energetic layers that comprise the Planetary, Galactic, and Universal consciousness energy systems. This combined network is the Unified field of Energy and Consciousness that together make up the entire time and space field of multiple dimensions, as well as the individual form and consciousnesses that reside in the entire Cosmic Structure. See Universal Time Matrix.

When focusing on the request for Axiatonal Alignment, one is bringing conscious awareness to all layers of these multiple dimensions of intersecting energy lines. This is to bring awareness of unification between all levels, personal, Planetary, Galactic and Universal energetic alignment with the Unification of the Christos Trinity-Wave format, the Unity Field. During the end of the Ascension cycle our planet and humanity is evolving beyond a bi-wave (polarity) structure and into a tri-wave (Unity Field) grid format which connects to the Unity Logos. (See Bi-Wave Influences and Triad Communication Station)

Our thought Consciousness creates a Holographic grid program that repeats in cycles and can be best understood if you study Sacred Geometry. The grids consist of a matrix of sound, light and color through which we virtually experience time and emotion. In physical reality the grids are electromagnetic creating polarity or duality of experience, looking to restore balance.When one is in the process of awakening and moving through the healing process of healing self by healing others, one creates balance, increases their psychic abilities, and obtains a final understanding of the nature of reality and where it is all going. Reality is about the evolution of consciousness in the alchemy of time.

Grid energy is the very essence and fabric of the universe. In the following illustration created by Deja Allison (Usui Reiki Master, Hypnotherapist, Ph.D in Motivational Studies, GBCT Instructor) the grid has no beginning and no end. Looking at the grid vertically you will see it makes a four-sided diamond shape, following creational/sacred geometry showing the interlaced woven matrix of Universal essence. When energy flows unobstructed, the flux remains relativity even, though there is always intonation at all times. You can see examples of how the shape forms other geometry for manifestation. Human DNA is configured by this geometry. In order for the flux to have different levels of intonation there must be catalysis of some kind. Thoughts and action are two different kinds of catalysts. Therefore, there must be movement to effect change. Different laws affect the consciousness of the grids such as balance, neutrality as well as immutable Universal Laws - codes of energy that once put into motion cannot be stopped and must play out until the end of the program. How those laws affect us is determined by our own energy patterns. Our thoughts and actions determine the Law of Attraction by the types of experiences to which we have experienced in this lifetime or another. Immutable laws cannot be stopped, the can be altered by events but not stopped.[1]

History of the World Grid Theory

The idea of the Earth as a geometric shape goes back in history at least to the Pythagorean school of thinking in ancient Greece. Its famous adherent, Plato, wrote that ‘the earth, viewed from above, resembles a ball sewn from twelve pieces of skin.

Grid Description -The octahedron, tetrahedron, icosahedrons and the dodecahedron (Platonic Solids) complete the global grid. This information was put together by husband and wife team Becker and Hagens.(However, this is an ancient source of information known by many Mystery Schools through the ages.) William Becker is a Professor of Industrial Design at the University of Illinois, Chicago and Bethe Hagens is a Professor of Anthropology at Governors State University. This husband and wife team shows how these shapes worked into the ultimate Earth Grid which they call the Unified Vector Geometry 120 Polyhedron or the UVG120 ‘Earth Star’.

Becker and Hagen ascribe this discovery to the work of Ivan P. Sanderson, who was the first to make a case for the structure of the icosahedrons at work in Earth. Sanderson located what he refers to as the ‘vile vortices’. These vortices are areas of the Earth where mysterious disappearances, mechanical failures and time-space distortions were seen to occur. Many explorers disappeared if they crossed over the vortices at the wrong time of year, with the wrong lunar and planetary alignments activating those particular areas.

During the times of Atlantis and possibly even earlier, the entire Earth’s coordinates were mapped out by the construction of the different pyramids, temples and earthworks on the Earth’s surface. These were known as the Maps of the Ancient Sea Kings. It was these maps that lead Sanderson to work on the Earth Grids. After the last pole shift 12,500 years ago, the main body of Atlantis land sank. With only a few survivors, it is believed that only a few of the maps may have survived as well.[2]

In ES community there are six main Planetary Grid Networks that are consciousness source fields that feed into the ley line networks and their many tributaries. These are discussed and are often referenced or interacted with in study discussions, meditations and treatments designed for architectural repair of these planetary consciousness networks. These combined Guardian projects are called PEG or Planetary Emancipation Gridwork projects. All ES Community trips and projects are directly sponsored and stewarded by the Krystal Star and Threefold Founder Flame Oraphim Guardian host of families that serve the Law of One, known as the Planetary Ascension Plan B mission upgrades for GSF.