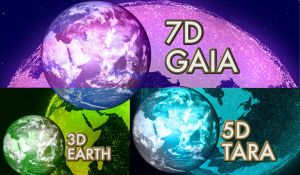 Earth is a terrestrial planet, telluric planet, or rocky planet that is composed primarily of silicate rocks or metals. About 74% of the surface of Earth is covered by liquid or frozen water. Within the Solar System, the terrestrial planets are the inner planets closest to the Sun; Mercury, Venus, Earth, and Mars.

The Earth originally came from Tara which was a planet in the second Harmonic Universe that exploded and then imploded into a black hole, some of the fragments were pulled into the lower dimensions and became our planet and Solar System. Organic and naturally evolving Solar Systems that remain connected to the Center Point of All Union generally include 12 planets, including the Sun or Solar body. In the Earth's Solar System, mainstream scientists have not recognized Nibiru and the planet Maldek which exploded a long time ago into the asteroid belt.

3D Earth is called Earth or Terra, 5D Earth is Called Tara and 7D earth is called Gaia. Different E.T. Races and extra dimensionals may call these future Earths by different names based on their language. (Such as Urantia) They are all planet Earth at different stages of evolution in the Timelines.

The 5D planet Tara exploded millions of years ago and as a result, was sucked into a reversal black hole which fragmented the entire fifth dimensional planetary blueprint into 12 planetary bodies in our current third dimensional Solar System. This includes the 3D version of Earth we inhabit in this Time Vector of the Universal Time Matrix. These 12 planets are Mercury, Venus, Earth, Mars, Maldek, Jupiter, Saturn, Uranus, Neptune, Pluto, Nibiru and then the Sun star. Current science recognizes only seven planets of the twelve in our Solar System, along with dwarf planets. [1]

The original 12 Tribes were created as a part of the plan that became the Covenant of Paliador to rescue the lost Souls of Tara, which would be made easier to recover during the Ascension Cycle when the Halls of Amenti were opened. The Luciferian Covenant was formed as a result of the earlier war of the Luciferian Rebellion, which was designed to divide and conquer the human tribes through intruder alliances of the NAA. This was to ensure the inner stargates, the Sphere of Amenti, and the Arc Portal Passages would be effectively damaged in order to ensure the failure of the recovery mission known as the Covenant of Paliador.