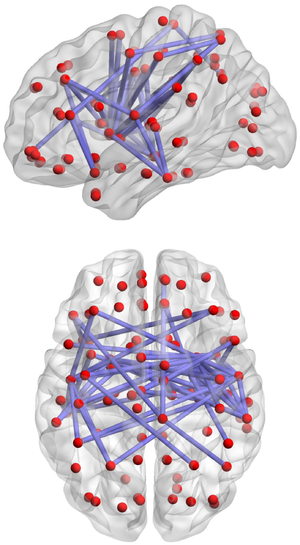 Neural net is a brain neural network which is a biological network. This term may also refer to artificial neural net, which is a computer generated architecture neural network. It is the structure of our nervous system that communicates to the brain many complex patterns related to the storage of memories and processes functions of the body, body parts and consciousness.

A biological neural network (sometimes called a neural pathway) is a series of interconnected neurons whose activation defines a recognizable linear pathway through many connection points. The interface through which neurons interact with their neuron neighbors usually consists of several nerve axon terminals connected via nerve synapses to nerve dendrites and then on to other neurons. If the sum of the input signals into one neuron surpasses a certain threshold, the neuron sends an action potential (AP) at the axon hillock and transmits this electrical signal along the axon. The axon hillock is a specialized part of the cell body (or soma) of a neuron that connects to the axon.

In the brain, memories are recorded in structures that are represented by patterns of activation among the networks of neurons. However, how these representations are formed into patterns in the brain neural network, then retrieved and reach conscious awareness is not completely understood. Cognitive processes that characterize human intelligence are mainly ascribed to the emergent properties of complex dynamic characteristics in the complex systems that constitute neural networks. Therefore, the study and modeling of these networks have attracted broad interest under different paradigms and many different theories have been formulated to explain various aspects of their behavior. One of these — and the subject of several theories — is considered a special property of a neural network: the ability to learn complex patterns.[1]

The Neural Net is the structure of our nervous system that communicates to the brain the many complex patterns related to the storage of memories, processes and functions of the body, body parts and Consciousness. Our brain neural net stores data and memories to build a series of interconnected neurons through a neural pathway. The NAA uses AI machinery and implants to create artificial neural networks that are designed to hijack our biology and CNS, thereby taking control over the human neural net, as well as the planetary neural net. The neural pathway defines a recognizable linear pathway through many connection points in our brain. When our neural net is being impacted or changed by the magnetic shifts, it can manifest radical shifts in our way of thinking and perceiving. When we are outside the Mind Control parameter of the lower frequencies of ego mind, through Observer Point consciousness and in meditation states, we will receive memories and awareness being returned to us. This is the natural function of the activated neural net as it comes into contact with multidimensional frequencies in other Timelines, through the Magnetic Field Shifting. We must tune out fear frequencies, tune out AI Signals in order to receive the signals of the higher frequency multidimensional broadcast.

The neural net of the planetary brain impulses information to the individual human nerve cell which impulses wave lengths of data to communicate to the human brain. The brain receiver of each individual human being will also receive impulses from the frequency they are attuned to in the collective consciousness thought programming. The combined ingredients of mind control and belief systems, will dictate how each human being will process this collective data transmission at their consciousness level. This means that the level of Frequency that a person operates on, and processes in their brain receiver center, will dictate how that person reacts or responds to this planetary neural net stimulus. Depending on the brain, neurological and consciousness development of each human being, the quality of thought will be represented by the frequency they hold. Either lower density negative emotions that are promoted by the NAA military programs to feed chaos, pain and disruption, or the ability to elevate ones consciousness to hold peaceful, loving and neutral observations. It is time for the divine masculine to come visibly to the surface and help show the way for the men on this earth to open their heart.[2]

Found in HGS Manual on page 90