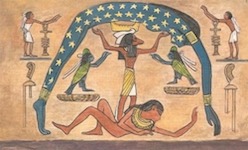 Nut was the goddess of the sky in the Ennead of Egyptian mythology. She was seen as a star-covered nude woman arching over the earth, or as a cow.

Nut is a daughter of Shu and Tefnut. She is Geb's wife as well as sister. She has four or five children: Osiris, Set, Isis, Nephthys, and sometimes Horus. Her name is translated to mean 'sky' and she is considered one of the oldest deities among the Egyptian pantheon.