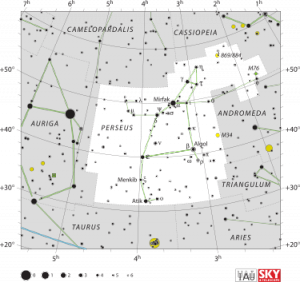 Perseus, named after the Greek mythological hero Perseus, is a constellation in the northern sky. It was one of 48 listed by the 2nd-century astronomer Ptolemy and among the 88 modern constellations defined by the International Astronomical Union (IAU). It is located in the northern celestial hemisphere near several other constellations named after legends surrounding Perseus, including Andromeda to the west and Cassiopeia to the north. Perseus is also bordered byAries and Taurus to the south, Auriga to the east, Camelopardalis to the north, and Triangulum to the west.

The galactic plane of the Milky Way passes through Perseus but is mostly obscured by molecular clouds. The constellation's brightest star is the yellow-white supergiant Alpha Persei (also called Mirfak), which shines at magnitude1.79. It and many of the surrounding stars are members of an open cluster known as the Alpha Persei Cluster. The best-known star, however, is Algol (Beta Persei), linked with ominous legends because of its variability, which is noticeable to the naked eye. Rather than being an intrinsically variable star, it is an eclipsing binary. Other notable star systems in Perseus include X Persei, a binary system containing a neutron star, and GK Persei, a nova that peaked at magnitude 0.2 in 1901. The Double Cluster, comprising two open clusters quite near each other in the sky, was known to the ancient Chinese. The constellation gives its name to the Perseus Cluster (Abell 426), a massive galaxy cluster located 250 million light-years from Earth. It hosts the radiant of the annual Perseids meteor shower—one of the most prominent meteor showers in the sky.

Perseus is bordered by Aries and Taurus to the south, Auriga to the east, Camelopardalis and Cassiopeia to the north, and Andromeda and Triangulum to the west. Covering 615 square degrees, it ranks twenty-fourth of the 88 constellations in size. It appears prominently in the northern sky during the Northern Hemisphere's spring. Its main asterism consists of 19 stars. The constellation's boundaries, as set by Eugène Delporte in 1930, are defined by a 26-sided polygon.[1] 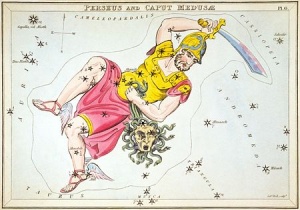 The constellation of Perseus may be derived from the Babylonian Old Man (MUL.SHU.GI) constellation, then associated with East in the MUL.APIN—an astronomical compilation dating to around 1000 BCE. In Greek mythology, Perseus was the son of Danaë, who was sent by King Polydectes to bring the head of Medusa the Gorgon—whose visage caused all who gazed upon her to turn to stone—as a wedding gift. Perseus slew Medusa in her sleep, and Pegasus and Chrysaor appeared from her body. Perseus continued to the realm of Cepheus whose daughter Andromeda was to be sacrificed to Cetus the sea monster. Perseus rescued the princess Andromeda from Cetus by turning it to stone with Medusa's head. He turned Polydectes and his followers to stone and appointed Dictys the fisherman king. Perseus and Andromeda married and had six children. In the sky, Perseus lies near the constellations Andromeda, Cepheus, Cassiopeia (Andromeda's mother), Cetus, and Pegasus.[2]