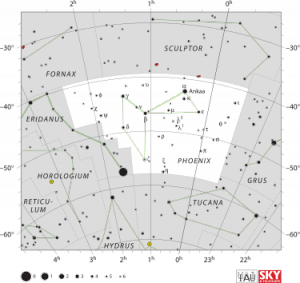 Phoenix is a minor constellation in the southern sky. Named after the mythical phoenix, it was first depicted on a celestial atlas by Johann Bayer in his 1603 Uranometria. The French explorer and astronomer Nicolas Louis de Lacaille charted the brighter stars and gave their Bayer designations in 1756. The constellation stretches from roughly −39° to −57°declination, and from 23.5h to 2.5h of right ascension. The constellations Phoenix, Grus, Pavo and Tucana, are known as the Southern Birds. The brightest star, Alpha Phoenicis, is named Ankaa, an Arabic word meaning 'the Phoenix'. It is an orange giant of apparent magnitude 2.4. Next is Beta Phoenicis, actually a binary system composed of two yellow giants with a combined apparent magnitude of 3.3. Nu Phoenicis has a dust disk, while the constellation has ten star systems with known planets and the recently discovered galaxy clusters El Gordo and the Phoenix Cluster—located 7.2 and 5.7 billion light years away respectively, two of the largest objects in the visible universe. Phoenix is the radiant of two annual meteor showers: thePhoenicids in December, and the July Phoenicids.The constellation does not lie on the galactic plane of the Milky Way, and there are no prominent star clusters.

Phoenix is a small constellation bordered by Fornax and Sculptor to the north, Grus to the west, Tucana to the south, touching on the corner of Hydrus to the south, and Eridanus to the east and southeast. The bright star Achernar is nearby.[1]

Phoenix was the largest of the twelve constellations established by Petrus Plancius from the observations of Pieter Dirkszoon Keyser and Frederick de Houtman. It first appeared on a 35-cm diameter celestial globe published in 1597 (or 1598) in Amsterdam by Plancius with Jodocus Hondius. The first depiction of this constellation in a celestial atlas was in Johann Bayer'sUranometria of 1603.De Houtman included it in his southern star catalog the same year under the Dutch name Den voghel Fenicx, "The Bird Phoenix",symbolising the phoenix of classical mythology.[4] One name of the brightest star Alpha Phoenicis—Ankaa—is derived from the Arabic العنقاءal-‘anqā’ "the phoenix", and was coined sometime after 1800 in relation to the constellation.[2]

The Phoenix is often referred to as the firebird, and is the constructor of a funeral pyre:

“The phoenix is a bird of Arabia, so called because it possesses a scarlet (phoeniceus = purple) color, or because it is singular and unique in the entire world, for the Arabs say phoenix for 'singular.' This bird lives more than five hundred years, and when it sees that it has grown old it constructs a funeral pire for itself of aromatic twigs it has collected, and, turned to the rays of the sun, with a beating of its wings it deliberately kindles a fire for itself, and thus it rises again from its own ashes” [The Etymologies of Isidore of Seville, 7th century AD, p.265.]

The phoenix built its nest on top of the phoenix date-palm. It came from Arabia; i.e. Araba/Syria - Phoenicia, present-day Syria and Lebanon. As well as 'phoenix' the word denoted 'Phoenician' and the word 'purple'. The Phoenicians traveled to the edges of the known world at the time and introduced their alphabet, based on symbols for sounds - phonetics - rather than cuneiform or hieroglyphic representations, to the Greeks and other early peoples."[3]