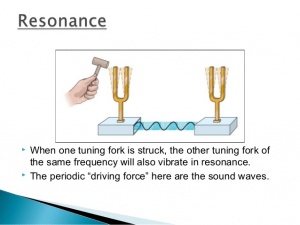 In physics, Resonance is a phenomenon that occurs when a vibrating system or external force drives another system to oscillate with greater amplitude at a specific preferential Frequency.

A physical system can have as many resonant frequencies as it has degrees of freedom; each degree of freedom can vibrate as a harmonic Oscillator. Systems with one degree of freedom, such as a mass on a spring, pendulums, balance wheels, and LC tuned circuits have one resonant frequency. Systems with two degrees of freedom, such as coupled pendulums and resonant transformers can have two resonant frequencies. As the number of coupled harmonic oscillators grows, the time it takes to transfer energy from one to the next becomes significant. The vibrations in them begin to travel through the coupled harmonic oscillators in waves, from one oscillator to the next. Extended objects that can experience resonance due to vibrations inside them are called resonators, such as organ pipes, vibrating strings, quartz crystals, microwave cavities, and laser rods. [1]

Our life force will react to adjust on every stimulus or force that it is being exposed to within the body, mind, emotions or spirit. If the force of stimulus is stronger than the inner life force present, the bodies are forced to adjust in a way where a consequence of that force is perceived or experienced. If the force of stimulus is dissonant the consequence of that force can range from mildly unpleasant to excruciatingly painful. Depending on the inner spiritual core development, will be the relative reaction or response that the impact of these forces will have upon your body, mind, emotions or spirit. If the mind is weak, unfocused and undisciplined, these forces will pack a punch to your emotional body, weakening your life force. Nothing is more powerful than the development of your inner spiritual source and its life force energy. As this motivates one to develop their spiritual body through ego discipline, this increases inner energetic strength, which repels these external and extra-dimensional forces from knocking you around. This is what it means to have a strong spiritual and inner core. The impact of these forces upon your energetic body and how they resonate with the frequency of your being is called, the Law of Resonance.[2]