Self-ownership (or sovereignty of the individual, individual sovereignty or individual autonomy) is the concept of property in one's own person, expressed as the moral or natural right of a person to have bodily integrity, and be the exclusive controller of her or his own life, as well as body, mind, and spirit. To achieve self ownership, one must make the effort to know their innermost selves, understand how their body and Consciousness works, as well as become aware of personal motivations and perceptions that influence their life decisions and quality of lifestyle. To master ourselves on the earth plane is to attain self mastery which is the process by which a person may have the freedom to take control over their own life, body, mind and spirit.

The possibility of self ownership is destroyed through the continual deception, Mind Control, Manipulation of Consent and NAA Archontic Deception Strategies that are broadcast to the masses in order to shape the anti human culture, increasing world slavery by monetizing human suffering and Human Trafficking.

To be sovereign over one's self is to be free of the control or coercion of others, to truly have the freedom to direct one's own life through Informed Consent. We extend that belief to include freedom over Self-Determination in the direction over one's consciousness which connects with the Soul, Spirit and higher intelligence spiritual bodies.

Self-Sovereignty is inherently a human right given through Universal Laws, expressed through the Law of One. The teachings of the Law of One describe the spiritual laws that govern our spiritual evolution for each dimension. It is a single philosophical system of World Humanism, which merges cosmology, science, Human Rights and spiritualism. 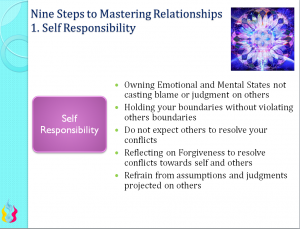 To accept personal sovereignty over one's complete self, also means that person must accept Self-Responsibility. As you increase your use of free will, you also increase the responsibility for your own actions and reactions.

Self-Responsibility – Being able to own your own emotional conflicts without blame, guilt or projection upon another person, by making it their fault. Do not assume that you know anything about that person that can be judged for what you cannot see or really know, as you have not walked in their shoes. When feeling upset, restore balance to your heart and aura, by lovingly holding your boundaries without violating others boundaries by expecting them to resolve your conflict. Be willing and open to learn what the “real issue” is, which most of the time not what it appears to be. Going deeper and reflecting on forgiveness of yourself and others, allowing time, neutralizes the conflict. Learning how to become responsible and accepting Self-Responsibility is a major step of productive Negative Ego clearing.

Human Rights are moral principles that describe certain standard of human behavior, they are the same in Gods natural laws, the Law of One:

1. I have the right to take care of myself, and protect myself from being threatened physically, mentally, emotionally or spiritually.

2. I have the right to set my own priorities and choose the manner I express to live on earth, as long as it does not intentionally harm others.

3. I have the right to express feelings, opinions, and desires.

4. I have the right to be treated respectfully.

5. I have the right to create my own happy, healthy life based in spiritual purpose.

6. I have the right to be GSF and be given the power to be in charge of directing my energies and life force.[1]

We extend that belief to include freedom of Self-Determination in the direction of one's consciousness which connects with the Soul, Spirit and the higher Avatar intelligence, the spiritual bodies which form into the powerful forces of protection that form the Spiritual Immune System. Self-Sovereignty is inherently a human right given through God Source and the Universal Laws, expressed through the Law of One which describe these laws that direct the complex quantum mechanics governing the movement of consciousness throughout time and space. Ascension is a simultaneous increase of expanded Consciousness that occurs when our spiritual-energetic bodies connect into our physical bodies, and thus when these higher consciousness bodies come online, they activate and amplify our Spiritual Immune System. Our Spiritual Immune System requires personal attention, Discernment of forces and proper nourishment in order to function well. It is the same as our physical immune system that requires nutrients and sustenance to be effective at deflecting and neutralizing negative pathogenic forces. [2]

12 Practices of Self Awareness