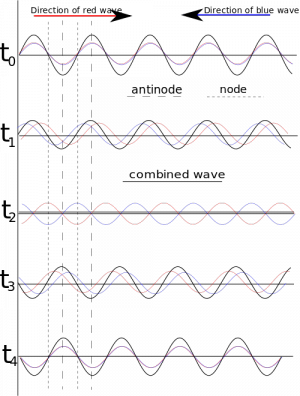 In physics, a Standing Wave – also known as a stationary wave – is a wave in a medium in which each point on the axis of the wave has an associated constant amplitude. The locations at which the amplitude is minimum are called nodes, and the locations where the amplitude is maximum are called antinodes. This phenomenon can occur because the medium is moving in the opposite direction to the wave, or it can arise in a stationary medium as a result of interference between two waves traveling in opposite directions. The most common cause of standing waves is the phenomenon of resonance, in which standing waves occur inside a resonator due to interference between waves reflected back and forth at the resonator's resonant frequency. For waves of equal amplitude traveling in opposing directions, there is on average no net propagation of energy.

In one dimension, two waves with the same frequency, wavelength and amplitude traveling in opposite directions will interfere and produce a standing wave or stationary wave. For example: a wave traveling to the right along a taut string and hitting the end will reflect back in the other direction along the string, and the two waves will superpose to produce a standing wave. The reflective wave has to have the same amplitude and frequency as the incoming wave. If the string is held at both ends, forcing zero movement at the ends, the ends become zeroes or nodes of the wave. The length of the string then becomes a measure of which waves the string will entertain: the longest wavelength is called the fundamental. Half a wavelength of the fundamental fits on the string. Shorter wavelengths also can be supported as long as multiples of half a wavelength fit on the string. The frequencies of these waves all are multiples of the fundamental, and are called harmonics or overtones. For example, a guitar player can select an overtone by putting a finger on a string to force a node at the proper position between the ends of the string, suppressing all harmonics that do not share this node.[1]