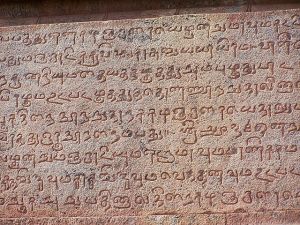 By order of appearance, Tamil would be considered the world’s oldest language as it is over 5,000 years old. The literature collection in Tamil, which is a classical language, is very vast. It is also varied. Tamil is very much a living language and thousands of newspapers are still published in the language.

Tamil culture, ethos and living traditions are strongly linked to a language known to us as Tamil. However, It is much more than a language to people.

In 2004 Tamil was declared a classical language of India, meaning that it met three criteria: its origins are ancient; it has an independent tradition, and it possesses a considerable body of ancient literature. In the early 21st century more than 66 million people were Tamil speakers. [2]

Language of the Stars

The Language of the Stars, an encoded architectural language of the multidimensional consciousness spirit, that governs the morphological process of progressing consciousness energy into matter forms. Its usage includes the building of the consciousness infrastructure that makes up the mechanics of the dimensional layers of the holographic reality, using complex instruction sets filled with light symbols that form the structures of time and dimension located throughout the Universal Time Matrix. All of this and more, comprises our original native human language that we have forgotten.[3]