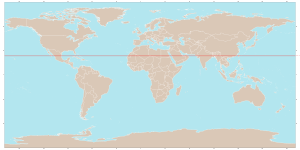 The Tropic of Cancer, which is also referred to as the Northern Tropic, is the most northerly circle of latitude on Earth at which the Sun can be directly overhead. This occurs on the June solstice, when the Northern Hemisphere is tilted toward the Sun to its maximum extent. It also reaches 90 degrees below the horizon at solar midnight on the December Solstice. Using a continuously updated formula, the circle is currently 23°26′11.4″ (or 23.43651°) north of the Equator.

Its Southern Hemisphere counterpart, marking the most southerly position at which the Sun can be directly overhead, is the Tropic of Capricorn. These tropics are two of the five major circles of latitude that mark maps of Earth, the others being the Arctic and Antarctic Circles and the Equator. The positions of these two circles of latitude (relative to the Equator) are dictated by the tilt of Earth's axis of rotation relative to the plane of its orbit, and since the tilt changes, the location of these two circles also changes.[1]

The Tropic of Cancer's position is not fixed, but constantly changes because of a slight wobble in the Earth's longitudinal alignment relative to the ecliptic, the plane in which the Earth orbits around the Sun. Earth's axial tilt varies over a 41,000-year period from 22.1 to 24.5 degrees, and as of 2000 is about 23.4 degrees, which will continue to remain valid for about a millennium. This wobble means that the Tropic of Cancer is currently drifting southward at a rate of almost half an arcsecond (0.468″) of latitude, or 15 m (49 ft), per year. The circle's position was at exactly 23° 27′N in 1917 and will be at 23° 26'N in 2045. The distance between the Antarctic Circle and the Tropic of Cancer is essentially constant as they move in tandem.

See axial tilt and circles of latitude for additional details.