In the Hebrew Bible, the Urim and Thummim are associated with the hoshen (High Priest's breastplate), divination in general, and cleromancy in particular. Most scholars suspect that the phrase refers to specific objects involved in the divination. [1]

Thummim (תוּמִים) is widely considered to be derived from the consonantal root תתּוּמִים (t-m-m), meaning innocent, while Urim (אוּרִים) has traditionally been taken to derive from a root meaning lights; these derivations are reflected in the Neqqudot of the Masoretic Text. In consequence, Urim and Thummim has traditionally been translated as lights and perfections (by Theodotion, for example), or, by taking the phrase allegorically, as meaning revelation and truth, or doctrine and truth (it appears in this form in the Vulgate, in the writing of Jerome, and in the Hexapla). 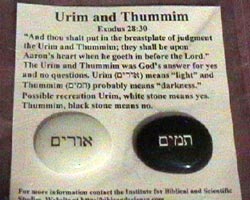 Although at face value the words are plural, the context suggests they are pluralis intensivus—singular words which are pluralised to enhance their apparent majesty. The singular forms—ur and tumm—have been connected by some early scholars with the Babylonian terms urtu and tamitu, meaning oracle and command, respectively. Many scholars now believe that אוּרִים (Urim) simply derives from the Hebrew term אּרּרִים (Arrim), meaning curses, and thus that Urim and Thummim essentially means cursed or faultless, in reference to the deity's judgment of an accused person— in other words, Urim and Thummim were used to answer the question innocent or guilty.

The description of the clothing of the Hebrew high priest in the Book of Exodus portrays the Urim and Thummim as being put into the sacred breastplate, worn by the high priest over the Ephod. Where the biblical text elsewhere describes an Ephod being used for divination, scholars presume that it is referring to use of the Urim and Thummim in conjunction with the Ephod, as this seems to be intimately connected with it; similarly where non-prophets are portrayed as asking HaShem for guidance, and the advice isn't described as given by visions, scholars think that Urim and Thummim were the medium implied. In all but two cases (1 Samuel 10:22 and 2 Samuel 5:23), the question is one which is effectively answered by a simple yes or no; a number of scholars believe that the two exceptions to this pattern, which give more complex answers, were originally also just sequences of yes/no questions, but became corrupted by later editing.

Most of the Talmudic rabbis, and Josephus, following the belief that Urim meant lights, argued that divination by Urim and Thummim involved questions being answered by great rays of light shining out of certain jewels on the breastplate; each jewel was taken to represent different letters, and the sequence of lighting thus would spell out an answer (though there were 22 letters in the Hebrew alphabet, and only 12 jewels on the breastplate); two Talmudic rabbis, however, argued that the jewels themselves moved in a way that made them stand out from the rest, or even moved themselves into groups to form words.

The first reference to Urim and Thummim in the Bible is the description in the Book of Exodus concerning the high priest's vestments; the chronologically earliest passage mentioning them, according to textual scholars, is in the Book of Hosea, where it is implied, by reference to the Ephod, that the Urim and Thummim were fundamental elements in the popular form of the Israelite religion, in the mid 8th century BC.Consulting the Urim and Thummim was said to be permitted for determining territorial boundaries, and was said to be required, in addition to permission from the king or a prophet, if there was an intention to expand Jerusalem or the Temple in Jerusalem; however, these rabbinical sources did question, or at least tried to justify, why Urim and Thummim would be required when a prophet was also present. The classical rabbinical writers argued that the Urim and Thummim were only permitted to be consulted by very prominent figures such as army generals, the most senior of court figures, and kings, and the only questions which could be raised were those which were asked for the benefit of the people as a whole.

Joseph Smith, founder of the Latter Day Saint movement, said that he used interpreters in order to translate the Book of Mormon from the golden plates. The interpreters he described as a pair of stones, fastened to a breastplate joined in a form similar to that of a large pair of spectacles. Smith later referred to this object as the Urim and Thummim. In 1823, Smith said that the angel Moroni, who had told him about the golden plates, also told him about the Urim and Thummim, "two stones in silver bows" fastened to a breastplate, and the angel intimated that they had been prepared by God to aid in the translation of the plates. Smith's mother, Lucy Mack Smith, described these Urim and Thummim as being like "two smooth three-cornered diamonds."

Smith also said he used the Urim and Thummim to assist him in receiving other divine revelations, including some of the sections of the Doctrine and Covenants and portions of the Joseph Smith Translation of the Bible. Although many of Smith's associates said they saw him use the devices, only Oliver Cowdery seems to have attempted to use them to receive his own revelation. Latter Day Saints believe that Smith's Urim and Thummim were functionally identical to the biblical Urim and Thummim. There is no evidence that the latter were ever used to translate unknown texts.

Smith extended the use of the term "Urim and Thummim" to describe the dwelling place of God, the earth in a future state, and the white stone mentioned in the Book of Revelation.[2]