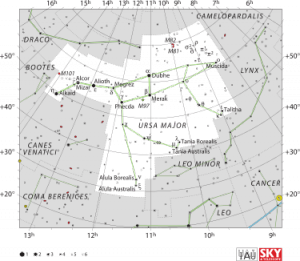 Ursa Major (Latin: "Larger She-Bear"; also known as the Great Bear) is a constellation visible throughout the year in most of the northern hemisphere. It can be seen best in the month of April. It is dominated by the widely recognized asterism known as the Big Dipper or the Plough, which is a useful pointer towards the north, and it has mythological significance in numerous world cultures.

Ursa Major has been reconstructed as an Indo-European constellation.It was one of the 48 constellations listed by the 2nd century AD astronomer Ptolemy. It is mentioned by such poets as Homer, Spenser, Shakespeare and Tennyson. The Finnish epic Kalevala mentions it, Vincent van Gogh painted it, and Federico Garcia Lorca mentions in his poem "Song for the Moon" written August 1920.

These stars are found along the southwest border of the constellation.

Several bright galaxies are found in Ursa Major, including the pair Messier 81 (one of the brightest galaxies in the sky) and Messier 82 above the bear's head, and Pinwheel Galaxy.

The constellation of Ursa Major has been seen as a bear by many distinct civilizations. This may stem from a common oral tradition stretching back more than 13,000 years.[21] Using statistical and phylogenetic tools, Julien d'Huy reconstructs the following Palaeolithic state of the story: "There is an animal that is a horned herbivore, especially an elk. One human pursues this ungulate. The hunt locates or get to the sky. The animal is alive when it is transformed into a constellation. It forms the Big Dipper".

In Burmese, Pucwan Tārā (pronounced "bazun taja") is the name of a constellation comprising stars from the head and forelegs of Ursa Major; pucwan is a general term for a crustacean, such as prawn, shrimp, crab, lobster, etc.