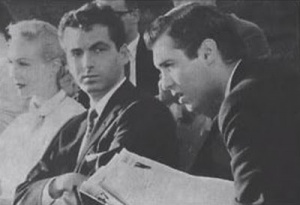 One particular visitor with Eisenhower, Valiant Thor from Venus, was living in the Pentagon for three years (1957-1960).He was interrogated for military weaponry and technology, and took part in several of the meetings to brief the Joint Chiefs of Staff, one such being Vice President Richard Nixon at the time. Soon after his arrival, together with three members of his crew, he joined a convention in the back yard of the home of Mr. Howard Menger in High Bridge, New Jersey. The month was April, 1957. A certain group of individuals who were interested in UFOs were meeting that day. Val and his crew members, Donn, Jill and Tanyia, had changed into the same type of clothing worn by their Earth friends. The meeting was very interesting and these people were on the right track. He was dismayed to learn the undignified manner in which these people were treated by the press.[1][2]

“The landing of Valiant Thor was perhaps the first documented landing of a human-type alien by military officials. He met with President Eisenhower and Vice President Richard Nixon for an hour, then the alien was put on VIP status and shuttled back to the Pentagon.” –Harley Byrd, Project Blue Book, Division of United States Air Force.

On March 16, 1957, in Alexandria, Virginia, one of the finest leaders of the planet Venus, operating under the direction of the Central Control and who had been chosen to make the contact as well as direct the project, landed his craft and was met by two police officers, weapons drawn.

A thought transference quickly convinced them that he meant no harm and he was ushered into the back seat of their patrol car. After crossing over into Washington, D.C., they were met by the Secretary of Defense along with six of his staff members. Soon police from every conceivable district and agency had joined in, all trying to claim their right to escort him to President Dwight D. Eisenhower.

Through his own version of the power of positive thinking, he was able to dismiss them all and soon passed through the security posts followed by an Air Force Captain.

Meanwhile, his presence in the area had thrown everyone into a dilemma. The introduction he held from the High Council worried them because, though not written in any Earthly language, their minds were given power to properly translate the inscribed message.

Captain Gould (not his real name) asked him to remain and after downing two plain bourbons muttered... "My god, why couldn't this have happened on my day off?" Suddenly the door opened and six armed guards led Val to what appeared to be an elevator. It went rapidly to the bottom-most level. Maximum security was in place. After transferring to an underground train, they sped toward the White House. Six officials, six armed guards and three secret service men escorted him into the office of President Eisenhower.

Standing in front of his desk, the President said, "Of course, you know we have suspended all rules of protocol. I have a good feeling toward you. Please, sir, what is your name?" "And where do you come from?"

"I come from the planet your Bible calls the morning and the evening star."

"Can you prove this," he asked.

"What do you constitute as proof?"

He quickly retorted, "I don't know."

"Will you come with me to my ship?"

He answered with a quizzical look and said,"My friend, I cannot come and go as I please. There are others to be considered. There are committees to be consulted and security measures to be adhered to. Please spend some time with us here ...Let's get better acquainted ...learn more about one another ...and perhaps soon, real soon, well ...we shall see."

Val's instructions were to leave Washington, D.C., no later than March 16, 1960. That meant that there were less than three months during which he could confer with scientists, politicians, military men and the like. All missed his point entirely. They were all filled with self-ambition and cared little for the pressing needs of mankind. His efforts to bring about an end to the sickness and disease that plague this planet were met with pathetic refusal.

He was told over and over that his presence and his ideas were a threat to the political and economic structure. Certain religious leaders were also fearful of losing a grip on the people in the event that his presence was admitted on an official level. It was very disheartening that the administration failed to lay hold of such information that would change the course of human activities for the good... because of economic reasons.

Security regulations were very tight, but despite the fact that they knew he would come and go as he pleased, they delighted in playing their game. Val had vowed not to use force and so another course of action would be necessary if the information which he had to relate were to be disseminated. This is the reason why he contacted men of Godly character and strength around the world. Many are presently working in close contact with Val and other members of his crew.

His last meeting with the President did not reap any lasting results. He wanted to let the world know of Val's proposed plan, but the Secretary of Defense, the head of the Central Intelligence Agency and the Military Chiefs of Staff were opposed to his suggestion. The President attempted to effect a Joint meeting before the General Assembly of the United Nations.

But this plan too was rejected. He was informed that the U.N. would receive a special "press release" in the form of a memorandum to the Secretary General no later than February 7, 1966. These leaders of the U.S. Government argued long into the night, fearing that if the people of this nation learned of the plan Val was offering, they might choose to follow him instead of them.

When a man feels that his personal peace and tranquility may be threatened, the human reaction is always that of swift self- preservation. At one point, the Vice President insisted that the "pressure boys" allow the President to make the choice. He was vetoed without even a chance to complete his statements.

World conditions were not growing any better. Much international pressure was being brought to bear upon the administration. They fought diligently and enforced rigid regulations with stiff penalties for revealing Val's presence. Even a major newscaster who inadvertently learned of his visit through one of his paid informants was silenced by none other than the Central Intelligence Agency, which has consistently disclaimed all knowledge concerning UFOs. Meanwhile, they maintain secret files that could actually prove the existence of intelligent life in the universe beyond all doubt.

The morning of March 15, 1960 saw Val meeting with "Nancy Warren" who would continue to work inside the Pentagon and be one of his contacts in the Washington, D.C. area. She would continue communication with others who would become part of his Earth contacts.

There are still to this day many adversaries to human freedom. These parasites have imbedded themselves in all phases of human society and will never be exposed except by extraterrestrial intervention. There are confused individuals who have perfected a saucer-type aircraft. Some of these are the result of an attempt by some to institute a master race. Remnants of this group still exist.

These craft which they designed are still seen from time to time in areas of South America where some of those involved in the original plans still reside. These should not be confused with the spacecraft originating from other worlds or those coming from the interior of this planet. Nor should the occupants of craft originating from other worlds be confused with those "evil messengers" who do not originate from Earth but were cast INTO it after the first "war" ever recorded.

They are in league with Earthly low-grades who have condemned themselves because of their own choices.

On March 16, Val dematerialized and departed from this phase of his Earthly mission. His next stop was the outskirts of Alexandria, Virginia where his ship and his crew awaited his arrival, hidden by a wooded area. It was no problem for him to reassemble the atoms of his body inside his ship.

As his craft rose slowly, a number of people stopped and pointed excitedly in his direction. Others stood motionless, transfixed by the sight which they beheld. He felt such a tremendous feeling of love for all of them. There was no panic in them... just curiosity and a strong desire to know more. Then, as the USAF jets were scrambled, and with the force field now in full use, the planes darted past the ship unable to see them now. Even ground radar lost them on their equipment. Confusion once again reigned.

On the way back to Victor One, he meditated on his home planet, the low, heavy, colorful clouds, the even temperatures, the perfectly diffused sunlight that made shadows almost nonexistent, the lushness of the rich green grass surrounding his home. He was informed of several Earth people with whom he would maintain contact for a long time into the future.

Strangely enough, those who knew of his presence, yet who claimed disbelief, were those who feared the most. Others figured THEY should have been the ones contacted and not those who were.

Upon returning to his home planet, he advised the Council of Central Control of the results of his Earth visit including the failure of the leaders of the United States to "take him up" on his offer of advice and assistance to the human family.

He was given the following instructions:

As of this writing, he continues with this mission, at the same time assisting in preventing our "civilization" from being the cause of orbital chaos by the destruction of our planet. [3]