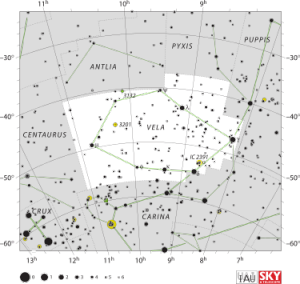 Vela is a constellation in the southern sky. Its name is Latin for the sails of a ship, and it was originally part of a larger constellation, the ship Argo Navis, which was later divided into three or four parts, the others being Carina, Puppis and, according to some authorities, Pyxis.[1][2][3] With an apparent magnitude of 1.8, its brightest star is the hot blue multiple star Gamma Velorum, one component of which is the brightest Wolf-Rayet star in the sky. Delta and Kappa Velorum, together with Epsilon and Iota Carinae, form the asterism known as the False Cross. 1.95-magnitude Delta is actually a triple or quintuple star system. Vela is bordered by Antlia and Pyxis to the north, Puppis to the northwest, Carina to the south and southwest, and Centaurus to the east. Covering 500 square degrees, it ranks 32nd of the 88 modern constellations in size. The three-letter abbreviation for the constellation, as adopted by the International Astronomical Union in 1922, is "Vel". Argo Navis was one of the 48 classical constellations listed by the 2nd century astronomer Ptolemy, and represented the ship Argo, used by Jason and the Argonauts on their quest for the Golden Fleece in Greek mythology. German cartographer Johann Bayer depicted the constellation on his Uranometria of 1603, and gave the stars Bayer designations from Alpha to Omega. However, his chart was inaccurate as the constellation was not visible from the Northern Hemisphere [1]

Vela, Latin for the sails of a ship, is a constellation in the southern sky. It was originally part of a larger constellation, the ship Argo Navis, which was later divided into three parts, the others being Carina and Puppis, plus a subordinate division of Argo now called Pyxis Nautica, the Nautical Box or Mariner's Compass, and which used to be called Malus, the Mast. The word Vela comes from the Indo-European root *weg-1 'To weave a web'. Suffixed form *weg-slo-; veil,Vela (sails, plural of velum), velarium, velum (sail), vexilum (a flag, banner, or ensign. The weblike part of a feather; the vane), voile (a fabric of plain weave used especially for making dresses and curtains), reveal1,revelation, (these words from Latin velum, 'a sail, curtain, veil'). [Pokorny weg- 1117. Watkins] To reveal something is etymologically to 'remove a veil' from it.[2]