Difference between revisions of "Coma Berenices" 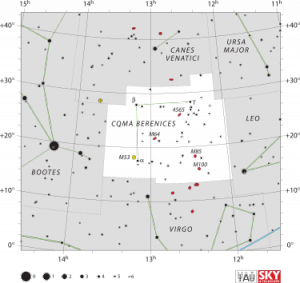 Coma Berenices is a traditional asterism that has since been defined as one of the 88 modern constellations. It is located near Arcturus, and the constellation Leo to which it formerly belonged, and contains the North Galactic Pole. Its name means "Berenice's Hair" (in Greek, via Latin), and refers to the legend of Queen Berenice II of Egypt, who sacrificed her long hair.

Coma Berenices is one of the few constellations to owe its name to a historical figure, in this case Queen Berenice II of Egypt, wife of Ptolemy III Euergetes (fl. 246 BC–221 BC), the king under whom Alexandria became an important cultural center.

In 243 BC, during the Third Syrian War, Ptolemy undertook a dangerous expedition against the Seleucids, who had murdered his sister. His newlywed bride, Berenice, swore to the goddess Aphrodite to sacrifice her long, blonde hair, of which she was extremely proud, if her husband returned safely. He did, so she cut her hair and placed it in the goddess's temple. By the next morning the hair had disappeared. To appease the furious king the court astronomer, Conon, announced that the offering had so pleased the goddess that she had placed it in the sky. He indicated a cluster of stars that have since been called Berenice's Hair. This incident inspired the court poet Callimachus of Cyrene to write a poem entitled Βερενίκης πλόκαμος (Greek "Berenice's braid"). About 2/3 of the Greek original is now lost, but the full version was translated to Latin by the Roman poet Catullus, and his version exists to this day.

Coma Berenices consists of a number of stars close together, and has been recognized as a distinct asterism since the Hellenistic period. Eratosthenes referred to it as both "Ariadne's Hair" and "Berenice's Hair". Ptolemy referred to it as "the lock" of hair; however, he did not list it as one of his 48 constellations, considering it to be a part of Leo, specifically, the tuft at the end of the lion's tail.[2]