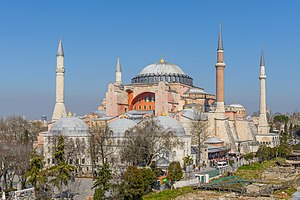 Hagia Sophia, Istanbul. The church was built in AD 537, during the reign of Justinian. Minarets were added in the 15th-16th centuries by the Ottoman Empire.

Hagia Sophia, "Holy Wisdom"; is the former Greek Orthodox Christian patriarchal cathedral, later an Ottoman imperial mosque and now a museum in Istanbul, Turkey. Built in AD 537 at the beginning of the Middle Ages, it was famous in particular for its massive dome. It was the world's largest building and an engineering marvel of its time. It is considered the epitome of Byzantine architecture and is said to have changed the history of architecture. Although sometimes referred to as Sancta Sophia (as though it were named after Sophia the Martyr), sophia being the phonetic spelling in Latin of the Greek word for wisdom.

In 1453, Constantinople was conquered by the Ottoman Empire under Mehmed the Conqueror, who ordered this main church of Orthodox Christianity converted into a mosque. Although some parts of the city of Constantinople had fallen into disrepair, the cathedral had been maintained with funds set aside for this purpose, and the Christian cathedral made a strong impression on the new Ottoman rulers who conceived its conversion. The bells, altar, iconostasis, and other relics were destroyed and the mosaics depicting Jesus, his Mother Mary, Christian saints, and angels were also destroyed or plastered over. Islamic features – such as the mihrab (a niche in the wall indicating the direction toward Mecca, for prayer), minbar (pulpit), and four minarets – were added. It remained a mosque until 1931 when it was closed to the public for four years. It was re-opened in 1935 as a museum by the Republic of Turkey. Wiki reference: [1]

Thus, Sophiology as the worship of the solar female aspect of the Christos, is the inner revelation of the Godhead’s wisdom as it has been imparted to humanity, to love your Mother and Father equally, which has influenced many ancient Essene and Christian mystics over the ages.

As an example, the Hagia Sophia Church in Istanbul saw Sophia as a co-equal with Christ, as an aspect of Christ, before it was seized in the Ottoman invasion and turned into a mosque, imbuing it with lunar influences.[2]