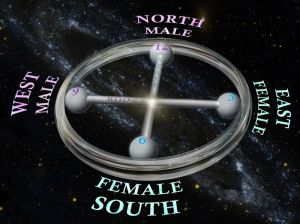 The recent reclamation of the Solar Rod Template embodied by Ezekiel has rippled out into the next stage of correcting the Father Sun masculine principle coding that is held within the Solar Rishic embodiment levels. Attaining this level was required for finally addressing the AI net mutations and Sextant Matrix inversions on planet and starting the process of resetting the 3-6-9 instruction sets through the anchoring of living Azothian solar fire golden elemental re-encryptions.

The Sextant Matrix is a part of the more advanced bio-clock function of the human lightbody system which has been tampered with and damaged through inverted spiraling currents also known as Metatronic Reversal. The sextant matrix runs metatronic reversal frequencies in our monadic layers of lightbody which compact our consciousnesses and harm the body on the biological time clock of death. It is the instrument used to measure and set the angle and rotation of the energetic current between the gender centers in the various positions throughout the holographic template. When our gender center is splitting apart from the extreme internal polarity of energies, it is the Sextant Matrix which is made inoperable, damaged or broken. This is why our bodies die on Earth with excessive molecular compaction, and we suffer deterioration through an Aging Disease that is not organic to angelic humans. The sextant matrix function is to designate the measurement of spherical angles and rotation of the counter spiraling energies that ultimately create a functioning merkaba layer in each hova body or at each completed harmonic triad level in our Universal system (3D-6D-9D-12D).

Ultimately the sextant matrix function is to unify the internal polarity of energies through merging the inner gender centers and like an opening of an umbrella, create the field burst which extends outward in the merkaba field layer. The Sextant Matrix was targeted by assorted anti-hierogamic and gender splitter technologies that generated gender and sexual damage that is embedded in the human physical body and lightbody. As the Cosmic Clock Reuche Initiation ripples throughout the planet this year, the sextant matrix functions will be impacted in the population. It may be interesting to observe how that will resolve itself or translate into the lived human experience.

Also, as a direct result of the Luciferian Covenant, the NAA groups exposed the planet to other invaders that spread death marks and beast coding into the NETS, which generated a host of genetic mutations in the lower section of the matter field of 1D-2D-3D. These net mutations are being purged out of the shadow body in this cycle, which has generated many types of inflammation related physical symptoms. These are primarily Psora Miasma skin rashes, which include shifts occurring in the bone, skin, and blood matrix with extensive realignments occurring within the entire Fascia connective tissue system.

The Father Sun codes are directly connected to the Triple Solar Masculine Christ template that holds the build the rod 3-6-9 architecture, which further can shapeshift into and transmigrate as the Rishic consciousness that takes form within the travelling vehicle of the Solar Dragon God body. The correction of the planetary rod instruction set and the larger domain pillars of the 3-6-9 in the Cosmic Clock are being directly held by Ezekiel’s solar rod in the position of the 8D Gaian Matrix. Now this victorious achievement starts unwinding the layers of embedded sextant matrix inversions recorded as net mutations and corrupted elementals. After the unwinding, the correct 3-6-9 rod architecture anchors and the grid network begins to correctly align and reconnect with the Emerald Crystal Heart of the Earth, which continues to flower and build out an Emerald Order superhighway of vertical, horizontal and diagonal communication lines.

The Father Sun codes appear as lilac spiraling currents coming from Ezekiel’s Gaian 8D body naturally resetting the Sextant Matrix architecture and braiding lilac codes into the Holy Father Arc waves, that are further supporting corrected rod alignments for the Triple Solar Masculine Christ. We have observed the same lilac colors appearing to animate and braid themselves within three Solar Dragon Ouroboros Lines that are encircling the entire Earth-Taran-Gaian Matrix.

With the revelatory onset of Father Sun 3-6-9 codes building the correct rod architecture, we can honor Nikola Tesla by taking into consideration his long famous quote:

“If you only knew the magnificence of the 3, 6 and 9, then you would have the key to the universe.”

As a Starseed brother on the Christos Mission attempting to crack the mathematical code of the universe that is responsible for the way energy comes into matter, he was absolutely correct. When studying circles (360 degrees, which is 3 + 6 = 9), Tesla discovered that no matter how many times you divided one, the outcome would always be a 3, 6 or 9. He knew these three numbers held great significance in the universe, nature and in the organic human blueprint.[1]