The Brain is an organ that serves as the center of the nervous system in all vertebrate and most invertebrate animals. The brain is located in the head, usually close to the sensory organs for senses such as vision. The brain is the most complex organ in a vertebrate's body. In a human, the cerebral cortex contains approximately 15–33 billion Neurons, each connected by synapses to several thousand other neurons. These neurons communicate with one another by means of long protoplasmic fibers called axons, which carry trains of signal pulses called action potentials to distant parts of the brain or body targeting specific recipient cells.

Physiologically, the function of the Brain is to exert centralized control over the other organs of the body. The brain acts on the rest of the body both by generating patterns of muscle activity and by driving the secretion of chemicals called Hormones. This centralized control allows rapid and coordinated responses to changes in the environment. Some basic types of responsiveness such as reflexes can be mediated by the spinal cord or peripheral ganglia, but sophisticated purposeful control of behavior based on complex sensory input requires the information integrating capabilities of a centralized brain.

The operations of individual brain cells are now understood in considerable detail but the way they cooperate in ensembles of millions is yet to be solved. Recent models in modern neuroscience treat the brain as a biological computer, very different in mechanism from an electronic computer, but similar in the sense that it acquires information from the surrounding world, stores it, and processes it in a variety of ways.[1] 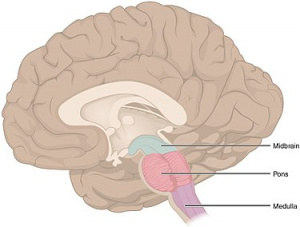 three distinct parts of the brainstem are colored in this sagittal section of a human brain.

The brainstem (or brain stem) is the posterior part of the brain, continuous with the spinal cord. In the human brain the brainstem includes the midbrain, and the pons and medulla oblongata of the hindbrain. Sometimes the diencephalon, the caudal part of the forebrain, is included.

The brain stem provides the main motor and sensory nerve supply to the face and neck via the cranial nerves. Of the thirteen pairs of cranial nerves, ten pairs (or twelve, if the diencephalon is included in the brainstem) come from the brainstem. The brainstem is an extremely important part of the brain as the nerve connections of the motor and sensory systems from the main part of the brain to the rest of the body pass through the brainstem. This includes the corticospinal tract (motor), the dorsal column-medial lemniscus pathway (fine touch, vibration sensation, and proprioception), and the spinothalamic tract (pain, temperature, itch, and crude touch).

The brain stem also plays an important role in the regulation of cardiac and respiratory function. It also regulates the central nervous system, and is pivotal in maintaining consciousness and regulating the sleep cycle. The brain stem has many basic functions including heart rate, breathing, sleeping, and eating.[2]

When we look at the larger Galactic picture of consciousness enslavement, we see the NAA's many pronged agenda to target the Brain, CNS and thought forms of every person on earth. Through the agenda of Transhumanism, we see the promotion of hybridization and synthetic integration with artificial neural networks for control over the CNS and brain. What is starting to surface with more clarity is that our human neurobiology is wired for empathy, which connects us to higher consciousness and has a spiritual function. The NAA and their minions of soulless AI infected synthetic beings do not have the bio-circuitry for empathy. We are in essence, in a struggle between human EMPATHS, and alien hybridized humans and extra-dimensional aliens that are NON-EMPATHS. This month we will look more deeply at Bio-Neurology, and the bio-circuitry of empathy for another layer of reveal. How chemical agents and ELF are used to target the CNS, and are actually destroying the human capacity for empathy. To understand how the stages of Ascension and bio-neurological expansion increase the capacity for empathy, aligning us to be of Service to Others and Planetary Gridworkers.[3]

The physical Brain contains Mirror Neurons that act as reflective mirrors of another’s perceptions and responses. They read energetic information transmitted from another’s minds and then relays a copy of that information throughout the observer’s central nervous system cells, which generate sensations of empathy for another. Yet, when people are disconnected from heart and soul, they lose the function of Empathy and this state can digress into classic Psychopathy. Through our empathic connection we experience the emotions and feel the intentions of others around us, which naturally leads to experiencing forms of Telepathy. Many people experience forms of Telepathy every day and yet they are mind controlled into denying the existence of telepathic communication as pseudoscience. Telepathic communication is not limited to just the physical body, it is an inherent function of the Lightbody or subtle energy anatomy of consciousness, which becomes more activated through the Higher Sensory Perception functions that come online with the higher development of the spiritual bodies.[4]

The left hemisphere of the brain is the self-cognitive, verbal and linear reasoning component of the mind. It fulfills the function of screening incoming stimuli by categorizing, assessing and assigning meaning prior to allowing passage of that content to the right hemisphere of the brain. The right hemisphere functions as the non-critical, holistic, non-verbal and pattern oriented component of the brain and tends to automatically accept the content passed from the left hemisphere without question. Both the sensory and motor cortices of the right cerebral portion of the brain contain sequences of points known as the Homunculus, which corresponds to points in the body. Stimulation of these corresponding areas on the cortex causes immediate responses in the associated portion of the body. Consequently, if there is an induction of suggestion through an stimulus that the left leg is numb, if it reaches the right hemisphere unchallenged and is referred to the appropriate area of the sensory cortex, this will result in an electrical reaction being generated that will induce the feeling of numbness in the left leg. [5]