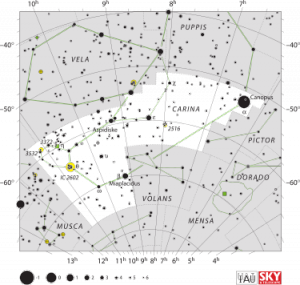 Carina is a constellation in the southern sky. Its name is Latin for the keel of a ship, and it was formerly part of the larger constellation of Argo Navis (the ship Argo) until that constellation was divided into three pieces, the other two being Puppis (the poop deck), and Vela (the sails of the ship). Carina is known for its namesake nebula, NGC 3372, discovered by French astronomer Nicolas Louis de Lacaille in 1751, which contains several nebulae. The Carina Nebula overall is a colossal emission nebula approximately 8,000 light-years away and 300 light-years wide that possesses vast star-forming regions.

Carina was once a part of Argo Navis, the great ship of Jason and the Argonauts who searched for the Golden Fleece. The constellation of Argo was introduced in ancient Greece. However, Nicolas Louis de Lacaille divided Argo into three component constellations in 1763, including Carina, the Keel. Despite the division, Lacaille kept Argo's Bayer designations. Therefore Carina has the α, β and ε, Vela has γ and δ, Puppis has ζ, and so on. Carina contains Canopus, a white-hued supergiant that is the second brightest star in the night sky at magnitude −0.72, 313 light-years from Earth. Alpha Carinae, as Canopus is formally designated, is a variable starthat varies by approximately 0.1 magnitudes. Its traditional name comes from the mythological Canopus, who was a navigator for Menelaus, king of Sparta.[1]

Canopus (Greek Canopos) is the alpha star of Carina. Plutarch says: "Moreover, they give to Osiris the title of general, and the title of pilot to Canopus, from whom they say that the star derives its name; also that the vessel which the Greeks call Argo, in form like the ship of Osiris, has been set among the constellations in his honour, and its course lies not far from that of Orion and the Dog-star; of these the Egyptians believe that one is sacred to Horus and the other to Isis." [Plutarch, Moralia] [2]