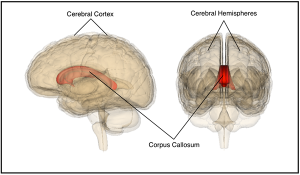 The Corpus Callosum, also known as the callosal commissure, is a wide, flat bundle of neural fibers about 10 cm long beneath the cortex in the eutherian brain at the longitudinal fissure. It connects the left and right cerebral hemispheres and facilitates interhemispheric communication. It is the largest white matter structure in the brain, consisting of 200–250 million contralateral axonal projections.[1]

The human brain is composed of Neurons, glial cells (that surround and protect the neurons), and blood vessels. The cerebral cortex is nearly symmetrical with left (male) and right (female) hemispheres that are mirror images of each other. The left and right cerebral hemispheres are interconnected by the Corpus Callosum, a very large nerve bundle on the crown. The hidden job of the Crown Chakra is to activate the corpus callosum to join the left and the right hemispheres of the brain, into one unified neurological and synaptic signaling function. Once the brain is unified in quality of vibrational thought pattern (female creative feeling uniting with male reasoning into thought balance), the energy of the entire body's right (male) side and left (female) side start to unify within the brain. This process of neurological unification, brain unification, thought unification and male and female energetic balance starts with the mind and Consciousness, that is focused on unification (unity). This activation of higher intelligence is the process, which interconnects all layers of the complex matrices of the human body through a unified consciousness of male and female principles. When the male and female are unified within, we are able to connect to consciousness and communicate with levels of intelligence unknown to science.[2]