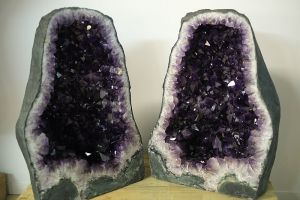 A Crystal is a crystalline solid in which atoms, molecules and ions are microscopically arranged into a crystal lattice that extends in all directions. Most of the common elements found in crystals originate in the earth crust and can be found in the periodic table according to their number of protons. However, it should be registered that the current Periodic Table presented in mainstream science is incomplete. During this cycle, new substances and elements are being birthed into matter which impact Crystal Properties. The elements that make up each crystal give it unique properties, such as its color, frequency potential and the intelligent design of its function on the earth. Most of the earth’s rocks are classified as Silicate Minerals that are based upon the chemical structure of the silica tetrahedron. Pairs of tetrahedra occur in many silicate minerals, forming the basic crystal structure of the planet, as well as the Silicate Matrix crystal structure in the human body, which determines the Gender Fin orientation for the merkaba spiral.

Paying attention to the wide-ranging use of silicate crystals throughout emerging advanced technologies, actually reveals similar parallels in how the crystalline consciousness in the human body works. We start to realize how valuable the human body really is in generating abundant supplies of energy potential and the ability to power up systems of energy. Silicon is most often used as a semiconductor, which is an essential component of most electronic circuits. A silicon chip can hold thousands of tiny transistors used to amplify or switch electronic signals and electrical power. Thus, anything that is computerized or relies on electromagnetic waves depends on semiconductors and transistors that are made from silicate crystals.

Crystals are neutrally charged unless they have been programmed directly, and thus the electromagnetic charge must be balanced in the crystal. This means that the amount of negative charge must be compensated by the same amount of positive charge to create energetic balance in the crystal. If the human body is a biological crystal, this tells us our body will logically return to energetic balance if we follow the laws of nature. However, crystals can become inactivated or made inert through a range of traumatic exposures, such as transmitting harmful artificial intelligence signals or electromagnetic weapons which can produce dead energy.

Crystals hold the blueprint of the living consciousness records contained in the evolutionary histories of the earth and beyond, recording the consciousness experiences of all life that have been imprinted through the complex patterns of frequencies and mathematical coding they can hold. Crystals can amplify and accelerate light frequencies that are similar to an energy based mathematical software program, they can be used for communication, transmission, teleportation, energy production, weather control and to store immense databases of frequency coded information.

Many of us may still hold cellular memories from the historical timeline records, in root race cycles spanning from Tara, or in the previous civilizations of Lemuria and Atlantis. We knew that crystals generated crystalline fields of energy that produced grid networks that controlled the holographic field of all creation. After the fall of Atlantis, the knowledge of the crystalline fields and holographic geography was carried over into the Egyptian culture, and many other ancient cultures that attempted to salvage interdimensional gateways of energy on the earth in an attempt to stabilize the planetary crystalline field. Our ancestors knew of the importance of crystals as sacred vibrational tools that supported our spiritual connection into the higher consciousness realms, and the significance that all living things are interconnected with the crystalline grid networks that exist in the planetary body.

Thus, many crystals have uniquely special properties which impact many spectrums of energy, frequency and vibration that are made through the crystal’s propagation of the direction of light and sound, as well as their electrical conductivity and piezoelectric properties. Crystals are just as unique in their individual energetic signature, as the many unique configurations and facets that are reflected in the individualized soul experience of a human being.

The earth body and the human body, as well as the entire DNA record is made in crystalline properties. The Silicate Matrix DNA template is the original human crystalline blueprint that is activated in the human body when contact or connection is made with love coded hydroplasmic light, which is essentially liquid crystals. The human energy field consists of an array of oscillating energy centers that are nested within a multi-dimensional blueprint of interacting crystal structures that organize into an assortment of crystalline functions. All of the interactive layers of the physical matrices, such as the organ and glandular systems, down to our skeletal structure are known to have piezoelectric properties and crystalline functioning. Our bone structure is the primary solid crystal in our physical body that acts as the main frequency transducer throughout our bodily matrices. Thus, the key to restoring energetic balance and health is to understand that we must sustain an abundant amount of life force to circulate through our physical structures, through the awareness we are a crystalline being that conducts energy through crystalline functioning. Everything that we are exposed to has an energetic signature and frequency that impacts our energetic balance. This means all humans have the same properties as crystals, the ability to amplify, absorb, store and transmit a range of vibrational energies that have an overall effect that is either healthy or unhealthy for the entire body. [1] 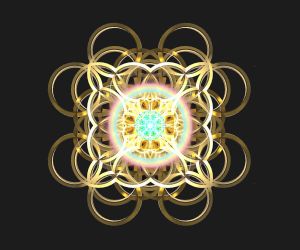 Solid crystals were originally created when the Earth was formed from a unique arrangement of geometric crystal lattices. The many crystal species continue to transform and develop with assorted energetic exposures, such as solar plasma and radioactive emissions, along with the shifting frequencies that are held in the evolving planetary crystal matrix. Crystals are recordkeepers of the entire planetary species collective consciousness as they are evolving through experiences in the dimensional timelines. They hold the imprints of the planetary DNA which are the Diamond Sun instruction sets for planetary evolution and human ascension connected to the God Creator. Whatever form the crystal takes, each crystal species has its own specific frequency note and metaphysical energetic themes which directly affect their properties and the way they function. Crystals are built from one of the possible seven geometric forms, hence they are crystalized expressions of the sacred creation rays that are emanating from the Seven Sacred Suns. These seven bright stars are visible to us in the Ursa Major constellation also known as the Great Bear, which further connect to the extensive Sun-Star network spanning access into Krystallah Galactic Suns.

Further, crystals hold a specific core geometry such as a triangle, square, hexagon, rhomboid or trapezium. In total there are seven crystal systems: triclinic, monoclinic, orthorhombic, tetragonal, trigonal, hexagonal, and cubic. Each shape has a precise function that connects to the geometric forms that are arranged in the blueprints of the planetary grid network. A crystal family is determined by their lattices and point groups, formed by combining crystal systems which have space groups assigned to a common lattice system. The shape of the lattice determines not only which crystal system the stone belongs to, but all of its physical properties and appearance. In some crystal healing practices the axial symmetry of a crystal is believed to directly influence its metaphysical properties. For example, crystals in the cubic system are believed to be grounding, because the cube is a symbol of the element Earth. Guardians mention that some crystal properties are greatly enhanced when in spherical shapes for concentrated effects, but raw and naked crystal formations are the best choice whenever possible. The center heart of the crystal consists of tiny rotating particles vibrating at a certain frequency which gives the crystal its unique energy. Whatever geometric form they take their crystalline structure can accrete, hold, conserve, focus or emit a range of electromagnetic frequencies from the ray system for spiritual healing, energy balancing and consciousness expansion.

Additionally, the Mother Goddess forces from the Mother Arc aquamarine rays are systematically increasing their presence by overlighting the natural kingdoms of the Earth and are actively directing the Aurora Crystal Kingdom to make their presence known in young children. There seems to be a special Guardian task force for the children in the under 12 years age group and another task force for parents to connect with in order to support their older children. It is for this reason the Aurora Crystal Healing Panel is being introduced for parents to support their children during these challenging times. Thus, it is being suggested to introduce babies and children to crystals and for parents and caretakers to pay attention to what crystals they and their children naturally gravitate towards. The purpose is that the younger the child the more they retain their innate connection to the crystal and gemstone kingdom, in which they can remember their higher sensory ability to naturally unlock crystal keys and activate healing powers which organically stream from the instruction set of the crystals. Crystals offer energy protection and have the ability to absorb and transmute negativity, artificial frequencies, noxious fields, toxins, extract entities and to help heal many other types of energy imbalances. [2]