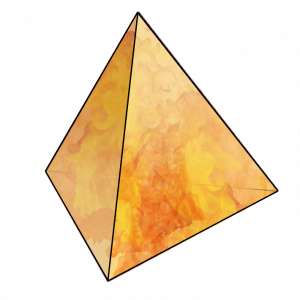 In geometry, a Tetrahedron (plural: tetrahedra or tetrahedrons), also known as a triangular pyramid, is a polyhedron composed of four triangular faces, six straight edges, and four vertex corners. The tetrahedron is the simplest of all the ordinary convex polyhedra and the only one that has fewer than 5 faces.

The tetrahedron is one kind of pyramid, which is a polyhedron with a flat polygon base and triangular faces connecting the base to a common point. In the case of a tetrahedron the base is a triangle (any of the four faces can be considered the base), so a tetrahedron is also known as a "triangular pyramid". Like all convex polyhedra, a tetrahedron can be folded from a single sheet of paper. It has two such nets. For any tetrahedron there exists a sphere (called the circumsphere) on which all four vertices lie, and another sphere (the insphere) tangent to the tetrahedron's faces. [1]

According to the Pythagorean symbolism in the Tetrad, Four is considered the root of all things and the source of all nature. It is the number of numbers because The Sacred Decad or 10, includes 1, 2, 3 and 4, because it is a symbol of the four of the first four numbers. The tetrad connects them throughout all numbers, elements, and temporary structures which manifest as recurrent cycles in time. A Master Builder or Mason is quantified by the number 22, which when broken down aligns back to the structure of Four. The Master Builder sees the archetype, and brings it down to earth in some material form. The Universal Prototype in the Law of Structure related to the Four is revealing its truth to us now. That which has been created with falsified archetypes or with deception is being destroyed. While that which holds the sacred and perfect number of the Universal Law will remain and reveal its truth. To consider the importance of the Four as the Universal Prototype in the Law of Structure, there are many aspects in creation, See The Sacred Decad. [2]:

A Tetrahedron is a platonic solid with four faces, and this platonic solid is also a symbol code that is used as setting the instruction for energy current in the grid networks. When we build the energy spirals that form into a Merkaba double tetrahedron field, it is created from the trinity field of the 3-6-9-12 vortex math.

Transcript - The Gender Fin is the point where the vertical energy currents of the merkaba spiral conduct into a node within the lightbody shield that distributes the frequency current throughout the horizontal clock shield. Again bring to mind the gender fin as the bottom and top triangle Tetrahedron that make up the six pointed merkaba star. This statement is noted as literally incongruent, as the tetrahedral star or Star Merkaba actually has 8 points. 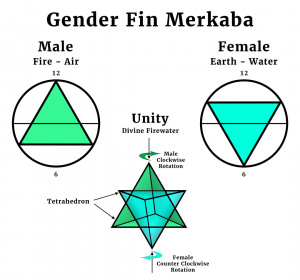 To visualize the female spin point and the male spin point starting positions in the Krystallah merkaba spiral, first think of the two triangles merged together, the triangle pointing down is the female, and the triangle pointing up is the male principle. Now bring to mind the face of a clock with only the time on the clock in the position of 6 and 12.

For the starting point of the spin for the female merkaba spiral, place the bottom triangle point aligned with the clock face at the 6 o’ clock position. This starting position is the Negative Polarity magnetic female principle spin is considered the Female Gender Fin Front 6 bottom orientation.

For the starting point of the spin for the male merkaba spiral, place the top triangle point aligned with the clock face at the 12 o’clock position. This starting position is the Positive Polarity electrical male principle spin is considered the Male Gender Fin Rear 12 top orientation.

To be honest here, I find that after twenty years of shielding, on the path of Ascension, that the spin points are set in their natural pattern, from having attuned to the 144 subharmonic strings of the Christ Ray and being connected to the God head. You don’t have to be a math wizard and understand geometry of the merkaba to ascend, what is required that you purify your vehicle and open your heart, practice the Law of One in your life, love creation and everyone in it. Then you will find your Lightbody restored gradually to its correct symmetry pattern, the eternal diamond sun pattern of the Christos.

The ascension path is unique for everyone, and it is important to allow ourselves to go beyond limitations of the mind and to be able to let go of what you learned on earth, to be able to experience this directly. Most of what we have been taught is incorrect unfortunately, The education we get in the controlled academic system is designed to trip us up so we get stuck on smaller issues, and if we can’t get past what we have been taught in school, it stunts our consciousness growth.[3][4]