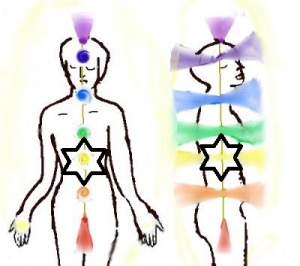 Also called the Solar Plexus Chakra it governs our 3rd Dimensional identity structures. The 3D identity structures are the three mind matrices of our Subconscious, Instinctual and Conscious/Reasoning Minds, See Three Layers of Ego. As these three stations of identity merge, the triad bodies combine into one 3D energetic grid level of a body, together they form and create a horizontal energy bodies. This formed horizontal shield is akin to an energetic completion of the 3D experience for the personality and the 4D Identities of the Soul Matrix and its frequencies start to pour into the energy bodies.

This Energy Center has the attributes of our consciousness that governs our mental functioning and issues around power, control, the freedom to be oneself, and our chosen career. The greatest need of this Chakra is to live in an organized world where everything is orderly and disciplined, to be an intellectual and be an individual. We are leaving human order for the higher expression of our divinity, or [[[Soul]], which has no reasoning in linear sequence to satisfy the ego, so this sets a world stage of confusion for many people unaware of what is transpiring with the Consciousness shift.

This Center is the foundation of the Ego Filters and its personality and is where we carry anger, hostility, rage and issues that arise when we feel threatened in our personal power or ambition. This area is a clearinghouse and receptacle for repressed emotions.

The Solar Plexus Chakra is related to the transition from base to higher states of emotion, as well as the exchange of energy, assimilation and digestion. This Chakra supplies the energy to all digestive organs such as the stomach, pancreas, gallbladder and liver which play a valuable role in digestion and the conversion of food matter into energy for the body. Digestive problems come out of imbalances or damage held in this Chakra.

Its function is controlled by the 3rd Seal of the Chakra Crystal Keys grid of the second level of the Lightbody. This Crystal Key is a primary Crystal Key that relates to certain bio-energetic functions in our bodies. The main physical upgrades will be focused on an improved cardio-vascular and pulmonary system functioning and the ability of the body to convert nutrients into usable energy management for the body. This means we may experience radical changes with our food, food consumption and how our bodies convert food into energy. We will require less consumed food as our bodies use Light source as a nutrient to convert energy for our bodies. When the Crystal Star is released it also begins to build the 3D layer functions of our merkaba body which begins to merge the next level of our Soul family identities (the past/future lifetimes) with our consciousness here at this density. This particular Crystal Star Seal also unlocks upgrades in the etheric Nadial Complex structure which is the energetic blueprint for our physical body’s Central Nervous System (CNS). This means upon completing the Star Crystal Seal release our CNS will have an upgrade that will allow greater capacity of electrical functioning and prepare the bodies to receive whole new levels of conducting, transmitting and holding frequency of the Soul Matrix.[1]

This is the Conscious Mind layer of the ego of which we all perceive as a self or personality. If one pays attention to their conscious thoughts, one becomes aware if they are having Negative Ego thoughts as defined above by the Seven Houses of Ego. All Houses of Ego are formed by making judgments of people and the external circumstances. The third layer is directly impacted by the first layer of our Unconscious Mind and second layer of the Instinctual Mind to the degree the painful memory has created walls of separation and traumatized sub-personalities. If the main areas of the Walls of Separation are not dismantled and sub-personalities brought into transparency for healing, these hidden influences control and manipulate the strength and power within the person’s Houses of Ego. Essentially the more weak and in pain a person is, the more strong their walls of separation (pain body) which create the judgments which build the Houses of Ego. In most cases the houses are also created as a coping mechanism to deal with the harshness experienced in the 3D world.

This is the 2009 planetary upgrade theme which is starting now to manifest in the personal light bodies of the Galactic Ascension Wayshower group. As the planetary grid is being reconfigured through our group human “body” it changes the way the energies interface with the planetary Lightbody, and simultaneously our own human lightbody construction undergoes major shifts and changes. Additionally this event will expand into a critical mass in the fields picking up much more momentum in the masses all year long. This Planetary Ascension Wave will crest towards mid May picking up another collective group of human beings that will begin to undergo their awakening process.The “Still Point” is within the area in between the rib cage underneath the breast bone. This upgrade is changing the configuration of the 3rd Chakra (Solar Plexus), its mental body functions and its relationship to the 5th Chakra (throat center) and it’s Lightbody. We are now reaching into the deeper levels of our “inner sanctum” by focusing our consciousness on our core. This inner sanctum is our still point and is a higher function of the human lightbody consciousness technology. (See the False Umbilicus).[2]