Chakras Function to transmit and receive the Spectrum of Frequency from the Universal Time Matrix through our body which acts as a vessel of Consciousness:

It is important to open the chakras and increase the circulation of energy flow or life force because the more energy that is flowing, the healthier and more balanced we are. When we are in energetic balance and have reasonable integration and connections between our body, mind and spirit, it is much easier for us to expand our consciousness and embody our higher spiritual blueprint. Illness in the body is caused by energetic imbalances or blockages of the flow through any of the layers of the bodies systems. Energy circulation blockages create Dead Energy and Miasma which lead to dysfunctions, disease patterns and pain.

Reduced energy flow not only leads to illness and states of disease, it creates distorted perceptions that allow us to be out of harmony with the natural laws that interfere with experiencing life as our true authentic self. The function of the chakras is to spin and draw in vital essences and consciousness energy to keep the spiritual, mental, emotional and physical health of the body in balance. 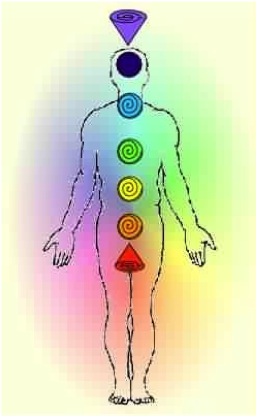 The Chakras major functions are:

1. Vitalize the Auric bodies and thus the physical body, organs and glands.

2. To bring about the biological spiritual growth and development of different aspects of self-consciousness and connection to life. Each Chakra is related to a specific psychological (higher spiritual blueprint) form and has specific intelligent functions. Many of these functions are designed to increase Higher Sensory Perception. 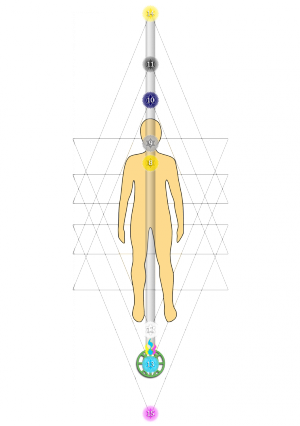 3. To transmit energy between the Auric layers. Each Auric body has its own set of seven major (particle) Chakras, and eight anti-particle Chakras each located in the same place on the physical body. Each progressive layer exists in increasingly higher Frequency, each with a higher frequency band than the lower one. Energy is transmitted from one layer to the next through pathways in the conical tips of the Chakra. Most of these pathways are sealed in most people. They open through the intention to align to expanding their consciousness or through spiritual purification work, such as when doing regular Meditation and devotional prayer. Since the Chakras serve to vitalize the body to create health and well being, when they are blocked, they are directly involved to any kind of pathology that may exist in the body.

Chakras are part of the subtle energy body, not the physical body, and as such, are the meeting points of the subtle (non-physical) energy channels, called the etheric nadis which are apart of the Nadial System. Nadis are channels in the subtle body through which the life force (prana), or vital energy moves and circulates. Chakras have a physical manifestation as well as are the metaphysical counterpart to the endocrine glands. (See Endocrine System).

Various scriptural texts and teachings present a different number of chakras. There are many chakras in the subtle human body according to many ancient wisdom and tantric texts, but there are seven chakras that are considered to be the most important ones in the main vertical central column which is called the Hara Line. The model we use is that there is seven primary particle chakras and eight anti-particle chakras that total to fifteen main chakras. Each chakra corresponds to the same number as the color Spectrum of Frequency and dimensional location in the Universal Time Matrix. Their name derives from the Sanskrit word for "wheel" or "turning", but in the yogic context a better translation of the word is 'vortex or whirlpool'. The main chakras operate similarly as the hard drive of a computer. Each hard drive has many files and directories stored as memories. One of the files is always open in each of the chakras, no matter how "closed" that particular chakra may be. What is displayed by the file is what shapes the individuals reality experience.[1]

Our chakras are very much designed like circular flower petals with seed crystals in its center. The crystal seed of our chakra flower is attached to the central vertical channel of the Hara Line and the “prana”, the breath of life, runs in circular patterns throughout our Vertical Channels and our chakras, when we are healthy and in energetic balance. The prana tube runs the movement of our breath in the same direction with the Hara Line or central vertical channel of which our chakra cones attach at their center.[2]

The physical body has Seven Primary Particle Chakras that merge with the anti-particle double of the main Chakra centers through Soul and Monadic spiritual body integration which is the process of spiritual ascension. These anti particle double Chakras are also called Morphogenetic Chakras. Our Morphogenetic Chakras are primarily dormant until we move through spiritual Ascension Stages of the Monadic activation at the 8th Chakra or we begin to work with the 12D Shield.

Some of us have noted for many years now our lower energy centers were shifting. Through the reconfiguration of these lower energy centers, known as the 1D-2D-3D Chakras, we could feel their color wave spectrum changing frequency. Some perceive this as embodying higher dimensional chakras with different frequency colors. This usually begins with Aurora coloring, perceiving the re-encryption process in the lower body which is making repairs to the etheric double and lower energy center functioning. The root or perineum area for many Star people is no longer red, but changes to lighter hues of violet, pink and once rolled up to the higher energy centers, it becomes shades of blue-green or light pastels. When we have embodied this frequency change, we do not have survival fears any more. We can clearly see when the False King of Tyranny, from the red wave spectrum, is manipulating victim archetypes in the public to incite fear. This frequency elevation process has been happening for some time, however, it is now happening progressively to more people. The lower Chakras used to be etheric cones that were non-physical membranes, located in the top layer of our Lightbody. The main energy centers are still present, yet are being elevated to run vital forces throughout our lower body glands, organs and meridians. The chakra cones will eventually become absorbed into the higher consciousness aspects of the body and reconfigured completely. See Dissolving Chakra Membrane[3]