Multiple stone Moais, which were created by the ancient Rapa-Nui people [1]

Easter Island (Rapa Nui: Rapa Nui; Spanish: Isla de Pascua) is an island and special territory of Chile in the southeastern Pacific Ocean, at the southeasternmost point of the Polynesian Triangle in Oceania. The island is most famous for its nearly 1,000 extant monumental statues, called moai, which were created by the early Rapa Nui people. In 1995, UNESCO named Easter Island a World Heritage Site, with much of the island protected within Rapa Nui National Park. 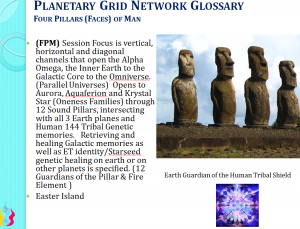 The FPM relates to the Threefold Founder Flame Consciousness Grid Network that is located in Chile at Easter Island. The Four Main Pillars of Consciousness units are massive Light-Sound pillars that are related to the creation of the entire Human 12 Tribes 144 harmonics in the DNA Genetic template, these consciousness units are the collective pillar(s) and the consciousness structure of the Founders elemental bodies. They contain all genetic, elemental material and race histories throughout the entire root race evolution cycles. When the diagonal lines are activated on planet earth at the end of the Ascension cycle through the Great White Lion GWL vertical and Golden Eagle Grid GEG horizontal merge,( or Rod and Staff alignment) the three parallel universes merge together through the activated Four Pillars of Man network.See the Four Living Creatures. 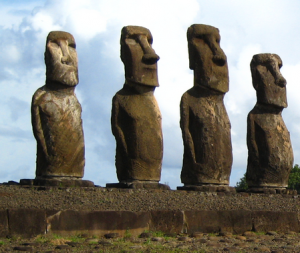 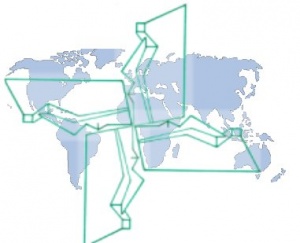 Founder's Four Faces of Man LPIN is in three sets of the four faces. One full set is an extension of the Earth LPIN connecting higher aspects of Earth: planets Tara and Gaia. The second set is another Four Faces of Man LPIN on parallel Earth, parallel Tara, parallel Gaia, and the third set on Inner Earth and connecting to its higher planets Inner Tara and Gaia. Hence the statement the 'Guardians of the 12 pillars' (three sets of four faces and sound pillars). The Four Faces of Man is the most extensive in space time but some of the others have connections to parallel Earth.The Four Faces of Man LPIN (Lemuria Pylon Implant Network) has been referred to as the 'Guardians of the four corners' and 'Angels of the four directions'. Its four heads are anchored in by sound pillars. In recognition of the Founder's creation of the Four Faces of Man, the Easter Island heads were built by ancient Indigo Maji descendants. This LPIN, created between 22,500 BC and 22,326 BC, was designed to restore the 12D blueprint of Earth and prevent fall of Earth into the Phantom Matrix. At the last planetary time cycle, intruder Annunaki raided Earth and prevented this LPIN from activating (during the ascension cycle). Thus it was rescheduled for 2012, began its first activation cycle in 2001 and the final 12th cycle in 2003, bringing the Great Great White Lion and Golden Eagle Grid on line. The Four Faces of Man is designed utilising such high frequencies that the fallen ETs in the NAA can't handle those energies.[3]