The Four Living Creatures as described in the Books of Ezekiel are the four main planetary grid networks which connect into the Maji Grail Crown Four Royal Stars which spans into all three harmonic universes. The Four Living Creatures hold the Cosmic Clock of the Aeons and the timelines connected in the galactic core that comprise the instruction sets and organic historical records upon the Earth, Tara and Gaia. The Four Living Creatures are the Great White Lion, Golden Eagle Grid, Sacred Blue Cow-Oxen and the Four Pillars of Man planetary grid networks. The Four Pillars of Man are also known as the Four Faces of Man or God which unify with the other three networks in order to generate the fifth elemental principle of divine ethers, which are the Guardians of the Pillar.[1]

The Aurora Krystal Star luminaries from the next stage of evolution into the Andromedan matrix have also returned to reclaim the Krystal architecture and Christos spiritual bodies that are to be reanimated in the New Universal Cycle, the Golden Aeonesis of Christos-Sophia. We are their physical conduit into the Earth plane with the mission to help reanimate the grid of the Four Living Creatures that make up our collective human consciousness and emotional-elemental body. The Four Living Creatures are represented through angelic human founder lineages of the Lion, Eagle, Ox, and Hu-Man that together form into the Guardian Consciousness Networks that make up the Planetary Grid Networks. The planetary grid networks were infiltrated by negative entities that are the Fallen Angelic hierarchies of the NAA that invaded our planet to enslave humanity. The Four Pillars of Man unite to awaken the 12 Guardians of the Pillar through the unification of the Four Living Creatures in the planetary body. (See Tetramorphic)

These Guardians protect the creation by embodying connections to form Solar Christ bodies in so to walk into an identity in every dimensional station of time. As we awaken from the inanimate clay of human flesh - we ignite the Fire of God in our crystal hearts through the Aurora luminaries to animate our fleshly being into the Eternal Solar Body. We then become the Reborn Children of the Sun, the Embodied Diamond Sun Guardians of the Creation. [2] 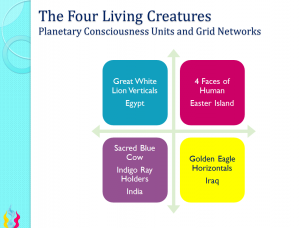 The Great White Lion Grid: APIN Network was created by the pure races and Guardian Founders. The Founder Feline Lion Planetary Grid Network was created by the Elohim Feline and Leonine Christos races in their image. The APIN grid networks were designed in the consciousness Ray of the Founder Lineages, The Great White Lion is the Mother races of the Blue Ray and a part of the Threefold Founder Flame Aqua Blue Ray of Mother Arc.

Session Focus is vertical, horizontal and diagonal channels that open the Alpha Omega, the Inner Earth to the Galactic Core to the Omniverse (Parallel Universes). Opens to Aurora, Aquaferion and Krystal Star (Oneness Families) through 12 Sound Pillars, intersecting with all 3 Earth planes and human 144 Tribal Genetic memories. Retrieving and healing Galactic memories as well as ET indentity/Starseed genetic healing on earth or on other planets is specified (12 Guardians of the Pillar 7 Fire Element).

According to the Pythagorean symbolism in the Tetrad, Four is considered the root of all things and the source of all nature. It is the number of numbers because The Sacred Decad or 10, includes 1, 2, 3 and 4, because it is a symbol of the four of the first four numbers. The tetrad connects them throughout all numbers, elements, and temporary structures which manifest as recurrent cycles in time. A Master Builder or Mason is quantified by the number 22, which when broken down aligns back to the structure of Four. The Master Builder sees the archetype, and brings it down to earth in some material form. The Universal Prototype in the Law of Structure related to the Four is revealing its truth to us now. That which has been created with falsified archetypes or with deception is being destroyed. While that which holds the sacred and perfect number of the Universal Law will remain and reveal its truth. To consider the importance of the Four as the Universal Prototype in the Law of Structure, there are many aspects in creation[3]:

Ezekiel’s individual identity had access to his Amethyst Order Holy Father Kantarian solar dragon body memories from Gaia. In the Books of Ezekiel, he was describing the planetary grid network which generated the Cosmic Clock of the Aeons principle, connected to the Solar Rod Template that his Christos dragon consciousness was embodying from within the 8D layers of the Universal Time Matrix. He memorialized this teaching for us as the Four Living Creatures, in which he describes the mechanics of the Cosmic Clock construct in our Universe and the original Founder Guardian planetary grid networks that had been installed to protect the Earth from utter destruction, as the desired end result of the NAA invasion.

The Twelve Guardians of the Pillar are what has allowed ongoing rainbow plasma pillar networks from the God Words to secure and stabilize the lower density planetary grids during the final conflict, as well as to finally return the 8D Solar Rod principle back to Founder Ezekiel. In the Gaian Matrix, the lower dimensional timelines of the Four Faces of Man link up with the Four Hands of Man golden body networks to generate the monadic family connection from Gaian timelines which merge with the lower timelines of the soul family extensions on the Earth.

Thus, the Liberation of Ezekiel and the repair of his massive solar rod consciousness body that fell during the Electrical Wars on Gaia, are directly interconnected with the corrections made by Guardian Host in the 8D Galactic Core and the Orion gateway for securing accurate Aeonic Pairings for correct male-female gender principle alignments.[4]