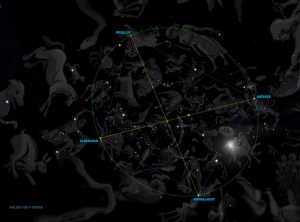 The East-West Axis of Aldebaran (Taurus) and Antares (Scorpio) as a pair, form the demarcation points of East and West that make the circuit through the Precession of the Equinoxes. This point is measured through the alignments made between these two stars and the Sun's path, at their axis of rotation made around the Galactic Center. When these two stars are paired in the rotational measurement of equal axis alignment, this event marks the opening of the cosmic time cycle. When The Golden Gate activated recently, this reversed the positional movement of the East –West axis as per directed in the Divine Infinite Calculus. This is saying that these stars have changed their positions in the Galaxy from their previous time cycle, from the perspective of Cosmic Time. These stars form the Four Cardinal Directions (N-S-E-W) measured in the Cosmic Time Cycle, which are being adjusted to the Cosmic Compass designed by Divine Infinite Calculus. The new celestial direction in the cosmic time cycle form the Crown of the Magi, which is a type of Cosmic Celestial Time Calendar that opens Infinity. This is why they are referred to as the Four Royal Stars. At the end of the Precession of Equinoxes, they adjust position and form the Crown of the Magi. Those that wear this Celestial Crown are able to contact infinity, however, they must be embodied Christ Consciousness. [3]