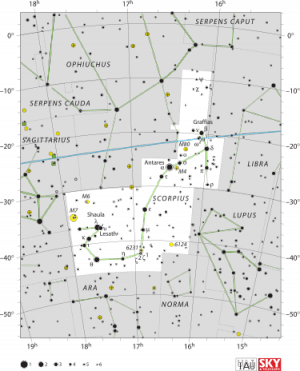 Scorpius, sometimes known as Scorpio, is one of the constellations of the zodiac. Its name is Latin for scorpion, and its symbol is (Unicode ♏). It lies between Libra to the west and Sagittarius to the east. It is a large constellation located in the southern hemisphere near the center of the Milky Way.

Scorpius contains many bright stars, including Antares (α Sco), "rival of Mars," so named because of its distinct reddish hue; β1 Sco (Graffias or Acrab), a triple star; δ Sco (Dschubba, "the forehead"); θ Sco (Sargas, of unknown origin); ν Sco (Jabbah); ξ Sco (Girtab, "the scorpion"); π Sco (Iclil);σ Sco (Alniyat); and τ Sco (also known as Alniyat, "the arteries").Marking the tip of the scorpion's curved tail are λ Sco (Shaula) and υ Sco(Lesath), whose names both mean "sting." Given their proximity to one another, λ Sco and υ Sco are sometimes referred to as the Cat's Eyes.

The star once designated γ Sco (despite being well within the boundaries of Libra) is today known as σ Lib. Moreover, the entire constellation of Libra was considered to be claws of Scorpius (Chelae Scorpionis) in Ancient Greek times, with a set of scales held aloft by Astraea (represented by adjacent Virgo) being formed from these western-most stars during later Greek times. The division into Libra was formalised during Roman times.[1]

In Greek Mythology the myths associated with Scorpio almost invariably also contain a reference to Orion. According to one of these myths it is written that Orion boasted to goddess Artemis and her mother, Leto, that he would kill every animal on the earth. Although Artemis was known to be a hunter herself she offered protection to all creatures. Artemis and her mother Leto sent a scorpion to deal with Orion. The pair battled and the scorpion killed Orion. However, the contest was apparently a lively one that caught the attention of the king of the gods Zeus, who later raised the scorpion to heaven and afterwards, at the request of Artemis, did the same for Orion to serve as a reminder for mortals to curb their excessive pride. There is also a version that Orion was better than the goddess Artemis but said that Artemis was better than he and so Artemis took a liking to Orion. The god Apollo, Artemis's twin brother, grew angry and sent a scorpion to attack Orion. After Orion was killed, Artemis asked Zeus to put Orion up in the sky. So every winter Orion hunts in the sky, but every summer he flees as the constellation of the scorpion comes. 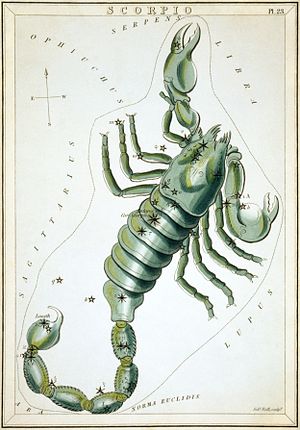 In another Greek story involving Scorpio without Orion, Phaeton (the mortal male offspring of Helios) went to his father, who had earlier sworn by the River Styx to give Phaeton anything he should ask for. Phaeton wanted to drive his father's Sun Chariot for a day. Although Helios tried to dissuade his son, Phaeton was adamant. However, when the day arrived, Phaeton panicked and lost control of the white horses that drew the chariot. First, the Earth grew chill as Phaeton flew too high and encountered the celestial scorpion, its deadly sting raised to strike. Alarmed, he dipped the chariot too close, causing the vegetation to burn. By accident, Phaeton turned most of Africa into desert and darkened the skin of the Ethiopian nation until it was black. Eventually, Zeus was forced to intervene by striking the runaway chariot and Phaeton with a lightning bolt to put an end to its rampage and Phaeton plunged into the River Eridanos. The Babylonians called this constellation MUL.GIR.TAB - the 'Scorpion', the signs can be literally read as 'the (creature with) a burning sting'.In some old descriptions the constellation of Libra is treated as the Scorpion's claws. Libra was known as the Claws of the Scorpion in Babylonian (zibānītu (compare Arabic zubānā)) and in Greek (χηλαι).[2]

In the required alchemical process of embodying our pure consciousness, there is a separation and isolation from that which interferes or contaminates the spiritual consciousness. These are the phases of which we may experience a separation or sequestering away from certain influences or forces. This isolation or sensation of wanting to sequester is a natural process, such as in acquiring a deep stillness. When it is required, we will find that isolation in order to be still and know we are one with God spirit. Once we can sense the growth of our inner spirit, we will have phases where we will look to isolate, or isolation will happen organically. This allows us to focus inside, communicate with and germinate our spiritual consciousness into fullness.[3]