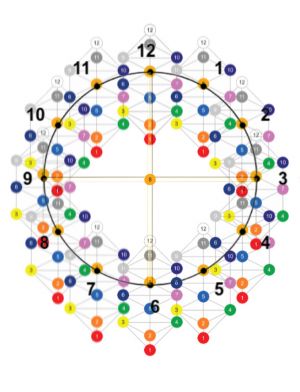 The planetary architecture of the Cosmic Clock is now secured by the Paliadorian and Krystal Star Guardian Host who are restoring the Natural Laws via the Krist-Krystallah coding in the God Worlds. This Diamond Sun alignment transmits to those on the Christos Mission and is gradually dissolving and imploding the Artificial intelligence technology that was originally used to invade the planetary Stargate system by the NAA.[1]

This cosmic shift in the Solar System is being synchronised into a new Aeon. This New Aeon is equal to a new measurement in cosmic time as well as the creation of a new cosmic entity. The New Aeon describes the horizontal measurement of time as having been adjusted by the Cosmic Clock, by the hand of God.

The Arc Zone began transmitting another level of the Holy Mother’s Aquamarine frequencies and Cosmic Kristos Arc Codes from the 13th Circuitry gateway for expedient Monadic activation, which is required for the planetary body and for each individual to gain access into the protected areas of the Arc Zone. Previously, about one third of the earth grids were able to hold the Krystic architecture that ran correct proportions of the Diamond Sun blueprint and tri-wave current that allowed for resetting of the organic timelines in the Cosmic Clock. Recent activations are spreading out the natural Krystic divine blueprint further into the planetary grid areas, which were previously running the reversed currents and Reversal Networks that fuel the artificial timelines. [3]

The Liberation of Ezekiel is a major keystone in the reclamation of Christos on Earth, this event is a major marker in the ascension timeline which tells us the outer liberation of planet Earth and angelic humanity is imminent. Thus, during this year of 2022 we will begin to see evidence in the outer world that this lengthy and horrific spiritual war with anti-Christ alien invaders is coming to a close, as more of the hidden truths about world events are increasingly being disclosed to the masses. This liberation event, brought about many frequency upgrades, transformations and spiritual body healings to the Christos spiritual family lineages of Ezekiel and Hatshepsut, is now reunited as the divine male-female 12th Solar Dragon Aeonic Pair in the Cosmic Clock of the Aeons.

On February 22, 2022, our planetary system begins the Cosmic Clock Reuche Initiation of the central seed of the higher heart, or the Cosmic Emerald Sun Awakening into the path of the Eukatharista. The Universal Time Matrix begins to open the density locks leading directly into the higher Inner God World realms which begins to flood Cosmic Mother’s aquamarine blue ray source of zero-point flames from within the diamond heart of the Cosmic Clock shield network.

The reunion of some of our Cosmic Christos family members in the hierogamic template of Golden Aeonesis is resetting the event horizons and timelines that were being held in place as the twelve Dark Aeons. This field alteration is returning the planetary consciousness access all the way back through multiple time matrices that reorient our particular location in this time and space, to the coordinates recorded as density 1-2, quadrant 4, corridor 4, and spectra 3. Then finally going all the way back to the 1st God World Creation by witnessing a sequence of opening interdimensional portals that begin to correct the Universal Time Matrix alignment with the original source fields of the Cosmic Clock. [4]