Bifurcation means the splitting of a main body into two parts. In the mathematical study of change that occurs within a structure or space, bifurcation occurs when a parameter change causes the stability of an equilibrium (or fixed point in a field) to change. The comprehension of the mathematical change that is currently shifting the geometric value of frequency, which further, generates a bifurcation in the structure of time and space, is very relevant to us now. This is directly related to the forthcoming split occurring between timelines which govern our continued consciousness (energy) expression on the earth plane as it is moving into future time. Thus, the planetary fields and humanity are coming to experience the next phase of the planetary Ascension Cycle, which is the nature of Bifurcation of Time. 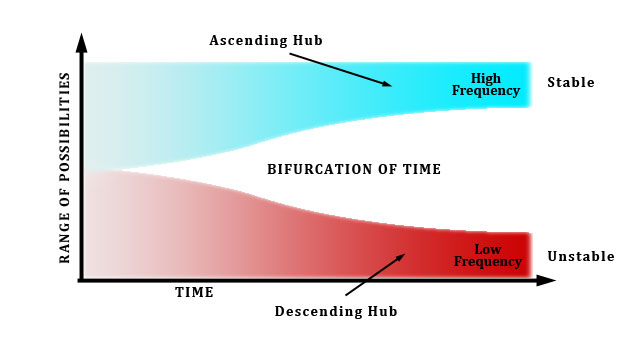 The lower the quality of overall energy, the more unstable and disconnected the personal and environmental experience on earth will become. The higher the quality of overall energy, the more stable and connected the personal and environmental experience on earth will become. The planetary collective energy field has many, many layers of intersection links which are building more access points into diagonal lines moving throughout interdimensional fields. These links make it possible to directly intersect into many different reality timelines, traveling in the past, present and future. This is called transdimensional time travel. The accumulative effect of gradually increasing frequency and changing instruction sets in many of the transdimensional time and space fields has reached a point of divergence. The culmination of reaching this point of divergence within trans-time and space is forcing the shift of the overall planetary energy field parameters. That pressure of force being applied in the planetary energy field is resulting in accumulative intensity and extreme polarity amplification. When the extreme polarity of combined forces that exist together within a collective energy field reaches its apex, a split occurs. This is called the point of divergence within the fixed point in the field (in the range of possibilities) of which a Bifurcation of Time transpires.[1]

Particle conversion is described as the Separation of the "Timelines" within the Earth's Field. This event was a progressive separation of the global particle fields. A new delineation of space and time in between the 3rd Dimensional consciousness and the next level of the Soul Matrix and its multidimensional consciousness.The 3D Earth went through the beginning phases of an expedited process of preparing for the particle conversion in 2006 that started aligning with the future fields of the Soul Matrix and further catalyzed humanity's progress into one of the increasing polarity spirals. Our downward or upward spiral of personal evolution was exponentially increased by these forces.[2]

Dark Night of the Soul

During the Bifurcation of Time our inner energetic integrity is being tested. This is the time to take stock of how well we are coping with the madness of the earth, as the collective mind of humanity travels the Dark Night of the Soul. Whether asleep or awake, our self-mastery is measured through how we personally deal with stress and chaos. No person on this earth is exempt from exposure to the massive fields of chaos, confusion and darkness that exist in the collective mind of humanity.

If we are not doing well with adaptability, flexibility and neutrality in our life situation, we must make adjustments to gain strength with this skill set. All people must take responsibility for the quality of their thoughts, behaviors, and actions. This month we explore the principles of Law of Cause and Effect.

As we undergo the bifurcation of time during the Ascension Cycle, it is supportive to understand that the current planetary consciousness shift radically magnifies and speeds up energetic forces that are governed by the Universal Law of Cause and Effect. As we move into the next Harmonic Universe, the Law of Cause and Effect manifests much more quickly, more accurately with the frequency being matched, and with more intensity on the material plane of earth than it ever did before. In every area of our life, when we generate belief systems, thoughts, behaviors, emotions and actions, this accumulates into energetic content that combines with the vibrationally matched consciousness fields that are in the environment. Moving forward, the energetic content that we send out will return back to us with increasing immediacy, and even instantaneously. Whatever the quality of energy that we broadcast out into the Universe, it sets into motion the accumulative frequency of the energetic content that will be directly returned back to us. This is why it’s crucial to be able to find our inner stillness in meditation, and broadcast as much unconditional love, Forgiveness, peace and gratitude to the Universe, as possible.[3]

This current cycle finalizes the Bifurcation in Time, between the type of matter formed on the third dimensional earth and the type of matter formed on the fifth dimensional earth. The easiest way to comprehend this is that the planet is shifting timelines into the next density that opens into future timelines, which exist in much higher dimensional spaces. The way the human mind directs intelligent consciousness energy to manifest into matter forms is forever changed on planet earth. The Separation of Worlds delineates the morphogenetic blueprint barrier between first density creations in the third dimension, and second density creations in the fifth dimension and above. There is a bifurcation in the planetary field between creations or bodies formed in the third dimensional frequencies in telluric matter, and those creations and bodies formed above those frequencies. Essentially, there is a frequency split occurring at the subatomic level of the blueprint of consciousness that is inherently connected to everything in creation. There are groups of humans that are connected to a third dimensional morphogenetic blueprint, and there are groups of humans connected to a fifth dimensional morphogenetic blueprint. [4]