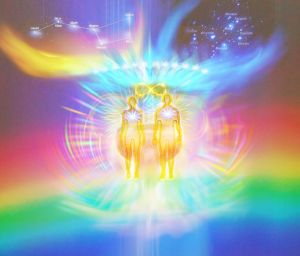 Together, their reunification in matter signifies the embodiment of the sacred Universal Rod and Staff to ensure angelic humanity’s return to the uniquely aligned destination that is based upon our original spiritual family’s Solar Sun-Star genetic factors. Through their return to this material world, they slowly reveal the mysteries of creation to the sincere spiritual seeker that loves truth, confirming the momentous position that our planetary collective consciousness has in fulfilling the divine plan of Universal Ascension within the Cosmic Order. Beloveds, we return back into the arms of our Cosmic Parents in the God Worlds as the crystal rose hearts of the star-born, the eternal stars that we are.[1]

The reunion of some of our Cosmic Christos family members in the hierogamic template of Golden Aeonesis is resetting the event horizons and timelines that were being held in place as the twelve Dark Aeons. This field alteration is returning the planetary consciousness access all the way back through multiple time matrices that reorient our particular location in this time and space, to the coordinates recorded as density 1-2, quadrant 4, corridor 4, and spectra 3. Then finally going all the way back to the 1st God World Creation by witnessing a sequence of opening interdimensional portals that begin to correct the Universal Time Matrix alignment with the original source fields of the Cosmic Clock. [2]