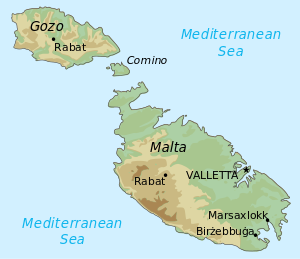 Malta is an archipelago in the central Mediterranean between Sicily and the North African coast. It's a nation known for historic sites related to a succession of rulers including the Romans, Moors, Knights of Saint John, French and British. It has numerous fortresses, megalithic temples and the Ħal Saflieni Hypogeum, a subterranean complex of halls and burial chambers dating to circa 4000 B.C.

Malta has been inhabited from around 5900 BC, since the arrival of settlers originating from European Neolithic agriculturalists. A significant prehistoric Neolithic culture marked by Megalithic structures, which date back to c. 3600 BC, existed on the islands, as evidenced by the temples of Bugibba, Mnajdra, Ggantija and others. The Phoenicians colonised Malta between 800 and 700 BC, bringing their Semitic language and culture. They used the islands as an outpost from which they expanded sea explorations and trade in the Mediterranean until their successors, the Carthaginians, were ousted by the Romans in 216 BC with the help of the Maltese inhabitants, under whom Malta became a municipium.

After a probable sack by the Vandals, Malta fell under Byzantine rule (4th to 9th century) and the islands were then invaded by the Aghlabids in AD 870. The fate of the population after the Arab invasion is unclear but it seems the islands may have been repopulated at the beginning of the second millennium by settlers from Arab-ruled Sicily who spoke Siculo-Arabic.

The Muslim rule was ended by the Normans who conquered the island in 1091. The islands were completely re-Christianised by 1249. The islands were part of the Kingdom of Sicily until 1530 and were briefly controlled by the Capetian House of Anjou. In 1530 Charles V of Spain gave the Maltese islands to the Order of Knights of the Hospital of St John of Jerusalem in perpetual lease.

The French under Napoleon took hold of the Maltese islands in 1798, although with the aid of the British the Maltese were able to oust French control two years later. As part of the Treaty of Paris in 1814, Malta became a British colony. It ultimately rejected an attempted integration with the United Kingdom in 1956 after the British proved reluctant to integrate.

Malta became independent on 21 September 1964 (Independence Day). Under its 1964 constitution, Malta initially retained Elizabeth II as queen, with a governor-general exercising authority on her behalf. [1]