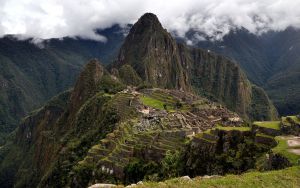 Machu Picchu is a 15th-century Inca citadel, located in the Eastern Cordillera of southern Peru, on a 2,430-metre (7,970 ft) mountain ridge. It is located in the Machupicchu District within Urubamba Province above the Sacred Valley, which is 80 kilometres (50 mi) northwest of Cuzco. The Urubamba River flows past it, cutting through the Cordillera and creating a canyon with a tropical mountain climate. Machu Picchu is an Incan citadel set high in the Andes Mountains in Peru, above the Urubamba River valley. Built in the 15th century and later abandoned, it’s renowned for its sophisticated dry-stone walls that fuse huge blocks without the use of mortar, intriguing buildings that play on astronomical alignments and panoramic views.[1]

The current shift into the next harmonic universe, the changing position of the World Soul to Machu Picchu’s Ancient Andromedan gateway system, and all the Melchizedek events brought to light this month are bringing on rapid and intense spiritual activations. As we process the liberation of the Universal Melchizedek Logos during the June Solstice [2022], this has impacted several areas on the planet that held some parts of the Emerald Founder Records.[2]

The Override Pillar Gates or Reuche Pillars are from the God worlds that serve to stabilize the planetary merkaba shields, they were placed during the crisis intervention of Ascension Plan B. They help to hold energetic integrity of the grids through the capacity to run the planetary levels of the Amoraea blue flame, which is like saying the inner holy spirit activation in the earth body.

Many of the original Essene lines were trapped in the Planetary Gates and Astral Plane during the many cataclysms that occurred on the earth from NAA wars and Orion Group Invasion. In this Krystal Star Hosting Cycle we will retrieve and reclaim them. This is the Reclamation of the Order of the Christos.

In terms of cultural significance, the Crux, like all constellations, played an important role in the belief system of many cultures. In the ancient mountaintop village of Machu Picchu, a stone engraving exists which depicts the constellation. In addition, in Quechua (the language of the Incas) Crux is known as “Chakana”, which literally means “stair”, and holds deep symbolic value in Incan mysticism (the cross represented the three tiers of the world: the underworld, world of the living, and the heavens). To the Aborigines and the Maori, Crux is representative of animist spirits who play a central role in their ancestral beliefs. To the ancient Egyptians, Crux was the place where the Sun God Horus was crucified, and marked the passage of the winter season. [3]

The Peruvian Gateway 7D invasion includes the 5D Macchu Picchu Stargate linked underground into the Vatican, which further connects to the underground Atlantic Ocean Black Rose Harvesting Station for human and child trafficking in the underground tunnel and water systems. Many of the elites had private islands and submersibles, these are small watercraft that are designed to operate underwater and thus far away from prying eyes.

The 7D current locations in the planetary grid are currently undergoing a major overhaul as the Cosmic Elohei have returned into their Solar Dragon God body, to evict this extensive antichrist matrix connected into the Peruvian Gates along with the entities from Alpha Draconis running it. The announcement of the return of Emerald Order Elohei, reveals as their Cosmic Dragon Star Twinned Plasma Domes are now made visible two miles above the peak of Macchu Picchu and underground in the Earth. Cosmic Holy Father and his Plasma Dome embodied in the Aquarian Solar Dragon in the air element taking the northern position on top of Macchu Picchu, while his counterpart the Cosmic Mother Dragon and her Plasma Dome took the water element into the southern position, located about two miles underneath the crust in the planet’s aquifer system. [4]