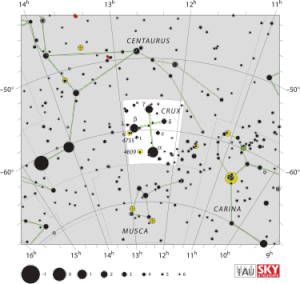 Crux located in the deep southern sky, is the smallest yet one of the most distinctive of the 88 modern constellations. Its name is Latin for cross, and it is dominated by a cross-shaped asterism that is commonly known as the Southern Cross. Although visible to the Ancient Greeks, it was seen as part of the constellation Centaurus, and not defined or accurately mapped till the 16th century.

Known as Acrux, blue-white Alpha Crucis is the constellation's brightest star and the bottom star of the cross. Nearly as bright are Beta and Gamma, while Delta and Epsilon make up the asterism. Many of the constellation's brighter stars are members of the Scorpius–Centaurus Association, a loose group of hot blue-white stars that appear to share a common origin and motion across the Milky Way. Two star systems have been found to have planets. The constellation also contains four Cepheid variables visible to the naked eye under optimum conditions. Crux also contains the Jewel Box, a bright open cluster, and the Coalsack Nebula, the most prominent dark nebula in the sky. Crux is bordered by the constellations Centaurus (which surrounds it on three sides) on the east, north and west, and Musca to the south. Covering 68 square degrees and 0.165% of the night sky, it is the smallest of the 88 constellations.

Crux was visible to the Ancient Greeks; Ptolemy regarded it as part of the constellation Centaurus. It was entirely visible as far north as Britain in the fourth millennium BC. However, the precession of the equinoxes gradually lowered its stars below the European horizon, and they were eventually forgotten by the inhabitants of northern latitudes. By AD 400, most of the constellation never rose above the horizon for Athenians. [1]

Like the Big Dipper (Ursa Major) of the northern sky, the Southern Cross indicates the location of the pole and as such is often utilized by navigators. The longer bar of the Cross points almost exactly toward the south pole of the sky, which some aviators and navigators have named the "south polar pit" because, it is not marked by any bright star. According to the writings of Richard Hinckley Allen (1838-1908), an expert in stellar nomenclature, the Southern Cross was last seen on the horizon of Jerusalem around the time that Christ was crucified. But thanks to precession — an oscillating motion of the Earth's axis — the Cross ended up getting shifted out of view well to the south over the ensuing centuries.

Immediately to the south and east of the Cross is a pear-shaped, inky spot, about as large as the Cross itself, that looks like a great black hole in the midst of the Milky Way. Crux is not visible north of +20° in the northern hemisphere, and it is circumpolar south of 34°S, which means that it never sets below the horizon. On the celestial sphere, Crux is exactly opposite the constellation Cassiopeia. It is the smallest constellation in the sky. [2]

Crux can be found on the national flags of Australia, New Zealand, Papua New Guinea, Samoa and Brazil. The New Zealand flag depicts only the four brightest stars of the Cross, while the banners of the other nations also include the faintest fifth star (known as Epsilon Crucis).

In terms of cultural significance, the Crux, like all constellations, played an important role in the belief system of many cultures. In the ancient mountaintop village of Machu Picchu, a stone engraving exists which depicts the constellation. In addition, in Quechua (the language of the Incas) Crux is known as “Chakana”, which literally means “stair”, and holds deep symbolic value in Incan mysticism (the cross represented the three tiers of the world: the underworld, world of the living, and the heavens). To the Aborigines and the Maori, Crux is representative of animist spirits who play a central role in their ancestral beliefs. To the ancient Egyptians, Crux was the place where the Sun God Horus was crucified, and marked the passage of the winter season. [3] 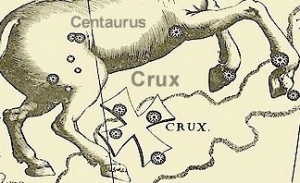 The 15th Century Italian Explorer, Amerigo Vespucci was the first of the Europeans to see the Four Stars, but did not use the title of the Cross, and called them Mandorla. Allen in Star Names notes:, "This literally an Almond, is the word used in Italian art for the Vesica Pisces, the oblong glory, surrounding the bodies of saints ascending to heaven". The word almond from Latin amygdala, from Greek amugdale, 'almond', is borrowed from Hebrew meghedh El, 'divine fruit'. The amygdala is an almond-shaped mass of gray matter in the anterior portion of the temporal lobe of the brain. The concept of the amygdala as an important contributor to pain and its emotional component is still emerging. Excruciating, crucify and crucifixion all share the same root meaning referring to a cross and to the associated pain and suffering.

The Mandorla is an ancient symbol of two circles coming together, overlapping one another to form an almond shape in the middle. Mandorla is the Italian word for almond. The Mandorla is also known as the Vesica Pisces, symbolizing the interactions and interdependence of opposing worlds and forces. The Mandorla depicts the union of apparent opposites, the same union of which the mystics speak. Our ego-consciousness divides reality into subject and object, whereas out true self experiences unity and harmony. Although the symbol has its origins before the Christian era, the early Christians used the symbol as a method to describe the coming together of heaven and earth, between the divine and human. [4] [5] 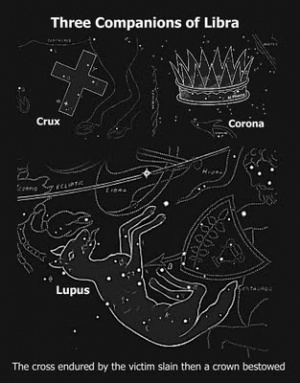 Did you know there is a sign for the cross of the crucified Christ in the stars? Crux, in the shape of a cross, is one of three Constellations in the southern sky under Libra. Crux is also known as the “Southern Cross.” Crux, or the Southern Cross is a constellation in one of the 12 signs, and these signs all have meaning and influence on collective consciousness. The meaning of the sign of Libra is “The price deficient balanced by the price which covers", and the meaning of Crux is “The Cross Endured”. The hidden meaning for the Libran sign is to point to a ransom that would be paid, on a cross, or crucifixion. [6]