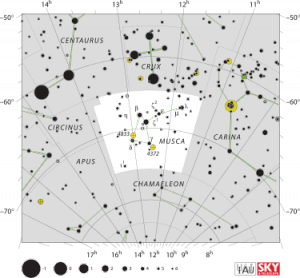 Musca (Latin: fly) is a small constellation in the deep southern sky. It was one of twelve constellations created by Petrus Plancius from the observations of Pieter Dirkszoon Keyser and Frederick de Houtman and it first appeared on a 35-cm (14 in) diameter celestial globe published in 1597 (or 1598) in Amsterdam by Plancius and Jodocus Hondius. The first depiction of this constellation in a celestial atlas was in Johann Bayer's Uranometria of 1603. It was also known as Apis (Latin: bee) for two hundred years. Musca remains below the horizon for most Northern Hemisphere observers.Many of the constellation's brighter stars are members of the Scorpius–Centaurus Association, a loose group of hot blue-white stars that appear to share a common origin and motion across the Milky Way. These include Alpha, Beta, Gamma, Zeta2 and (likely) Eta Muscae, as well as HD 100546, a blue-white Herbig Ae/Be star that is surrounded by a complex debris disk containing a large planet or brown dwarf and possible protoplanet. Two further star systems have been found to have planets. The constellation also contains two Cepheid variables visible to the naked eye. Theta Muscae is a triple star system, the brightest member of which is a Wolf–Rayet star.

Musca is bordered by Crux to the north, Carina to the west, Chamaeleon to the south, Apus and Circinus to the east and Centaurus to the northeast. Covering 138 square degrees and 0.335% of the night sky, it ranks 77th of the 88 constellations in size.

Located on the border with Circinus is the unusual planetary nebula NGC 5189, estimated to be around 1750 light-years away from Earth.Its complex structure is due to multiple ejections of material from the ageing central star, which are distorted by the presence of a likely binary companion.Located 2.4° east of Eta Muscae is the magnitude-12.9 Engraved Hourglass Nebula (MyCn 18), which lies about 8000 light-years distant from Earth. To Eta's west lies IC 4191, a compact bluish planetary nebula of magnitude 10.6, thought to lie around 10,750 light-years away from Earth.[1]

Musca was one of the twelve constellations established by the Dutch astronomer Petrus Plancius from the observations of the southern sky by the Dutch explorers Pieter Dirkszoon Keyser andFrederick de Houtman, who had sailed on the first Dutch trading expedition, known as the Eerste Schipvaart, to the East Indies. De Houtman included it in his southern star catalogue in 1598 under the Dutch name De Vlieghe, "The Fly".[2] They assigned four stars to the constellation, with a star that would be later designated as Beta Muscae marking the head, Gamma the body, and Alpha and Delta the left and right wings respectively.[3] It first appeared on a 35-cm (14 in) diameter celestial globe published in 1598 in Amsterdam by Plancius with Jodocus Hondius, though was unnamed.[4] The first depiction of this constellation in a celestial atlas was in the German cartographer Johann Bayer's Uranometriaof 1603,[5] though Bayer termed it Apis—the Bee, a name by which it was known for the next two centuries. .[2]

Belzebub, Baal Zebul, Baalzebub, or 'Beelzebub, is depicted as both a god of flies and also as a fly. “Belzebub was the idol of Accaron, and the word is translated as 'man of flies,' for a fly is calledzebub. The most impure idol, therefore, was called 'man of flies' because of the filth of idolatry, or its uncleanness” [The Etymologies of Isidore of Seville, 6th century A.D., p.185.]

"Apomyios (from Greek apo-myia, 'away from flies'), a surname given by the Cyrenians to Zeus, for delivering Hercules from flies during sacrifice. In his 10th Labor Hercules Hera sent a swarm of flies to attack the cattle of Geryon. Sacrifices were yearly offered to Zeus Apomyios.

Flies naturally hang around sacrifices and eat the food laid out as offerings to idols. Baalzebub, Baal Zebul, The -zebub -zebul comes from the Semitic root *zbl, 'To carry, raise, exalt'; Northwest Semitic noun *zabul-, prince. the word Jezebel is related, from Hebrew izebel, 'where is the prince'?, from zebel, akin Zebul, a name meaning “prince”, lord prince, name of a Philistine god who Jezebel encouraged the worship of, the Phoenician god Baal. In Revelation 2:20, a prophecy is uttered against a prophetess in the church of Thyatira named Jezebel. She is accused of inducing members of the church there to commit acts of sexual immorality and to eat food sacrificed to idols.[3]