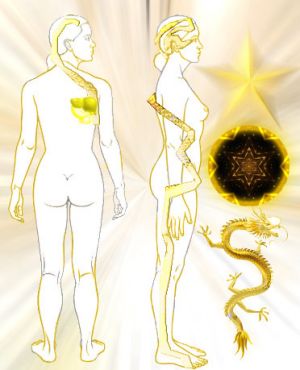 Transcript - Now, we introduce the alchemy and natural laws being presented for our group consciousness participation today. This actually pertains to a newly introduced aspect of the Cosmic Christos Solar Dragon of the Aquarian Dragon Ouroboros Line of our planet. So this is an understanding of exploration of Dragon body parts. We began our journey of His and our awakening, the Dragon Awakening, last December during the Lincoln Cathedral activations which brought forth the animating presence of the Golden Aquarian Dragon who embodies the Law of Vibration and is a part of the Solar Logos trinity that is inherently a part of the configuration of the Avatar Christos matrix, which is the fourth triad of intelligence that holds the higher frequency bands of 10D, 11D and 12D in our Universal Time Matrix.

Now we know that for a long time, the understanding of context that Solar Logos was imploded, destroyed, right? A part of a lot of the last 20 years and the architectural grid work and the cosmic Christos Guardian Host timeline repair was to reinstate, to repair, to rehabilitate, to bring forth the Solar Logos. So now what we are understanding what we’re interacting with here is an aspect of the Holy Father in his Cosmic Christos Solar Dragon form. So this is how he gets around through the Aquarian Dragon Ouroboros Line to again bring us into the awareness of his animating life presence through the Aquarian law, Aquarian principle. And understand this is a part of the Solar Rishic Founder coming into the Aquarian Dragon Ouroboros Line to enforce the law, to bring forth the kingship arcs. Which again show us through the Solar Logos right? – we understood the solar logos was not functioning was not operating.

So this Aquarian Solar Dragon aspect of our Holy Father is interacting with us and giving us information to understand more about his solar Dragon parts - how he expresses himself, how we interact with him, or can or are invited to, as it feels in alignment to our heart to our mind and to our body. Obviously this is in direct alignment to our natural progression and feeling of what feels natural and aligned to us personally. But as he explores with us, he is leading the way and showing us his identity, how he expresses himself in the matrix of our creation, how we interact with him or can, if we choose to.

Now the Cosmic Christos Suns send forth their ray principles and astrological correspondences through the 13 primary Dragon bodies enmeshed within the planetary matrix. So now we’re at a stage where Aquarian Solar Dragon of Holy Father, so the Solar Rishic Founder Holy Father principle comes into the embodiment through the Aquarian Solar Dragon and reminds me of the Solar Logos body and then further reminds me of the Aquarian Meridian Project that directly impacts the Gallbladder Meridian, the astral plane, the 2D/4D split. He's helping us to look at, he’s helping me at this time to look at and return to the cycle of time where this first came into my awareness in 2008 to seed that thought of the Aquarian Meridian Project and say “Remember this was me reminding you of the Solar Logos of which you are a part.” Of which we all are a part as we restore the solar logos configuration and we move this through the architecture on the astral plane to repair the soul. To repair as well what he shows as the gallbladder architecture of the organ in our body, which apparently is as well an embodied law and principle.

So, coming back to the gallbladder and understanding this as an organ in our own body. We’re embodied within a cosmic principle - the universal man, the cosmic man, human that we are - all of our organs embody principles.

So, Aquarian Solar Dragon of our Holy Father in the Solar Logos reminds us - Let's look at the Aquarian Meridians in the gallbladder architecture as this is a restoration of embodied law in principle. Not only in the macrocosm but in the microcosm we are, as we again connect to that holographic architecture that is being guided through the Solar Logos of our Founder Solar Rishic Father at this time.

So, coming to a moment as we connect to this principle in our own body. The gallbladder principle in our physical body is ruled by the Aquarian line. It is connected to our mental powers. The consciousness body and substance of our mental mind matrices are connected directly to the gallbladder principle. This is understanding the Aquarian overlay the Aquarian principles and laws give us mental power, mental substance. Now taking this further, the gift of our mental bodies, the gift of the ability to think, to have critical thinking, to have thought substance - this is what Holy Father reminds us. This is the gift of our body: to give us mental powers of critical thinking, to discern, to see. Because in the power of thought we can think something out in the analysis of a situation, we don't actually have to let's say experience it directly always, because we can think it out. We can in our mind imagine what it would be to think out various analyses of situations and then conclude various outcomes based upon these imaginings. This is a part of our critical thinking. This is also a part of our imaginings, which is our consciousness.

So, all of this is connected to - who knew? - our gallbladder principle and the Aquarian line, the Aquarian Meridian, the Aquarian Solar Dragon. All of this is interrelated. So this is again what our theme, our focus, our healing is here today and of course, why we’re discussing it so that we can grasp it at another deeper level. So, again, the mental powers of critical thinking of discernment of imaginings having analysis of situations gives us an ability to have strong discernment to develop ourselves so we may act wisely in situations of co-creatorship.

Now any time - this is what's very interesting - in looking at the current stresses we are all under with the current world outer scape environment. Now any time we are under incredible stress or obfuscation, confusion, gas lighting lies, okay, we’re under great stress to perceive things accurately. We’re trying to look at something or perceive something, analyze something accurately in our lives. And when we do we experience a sympathetic response in our gallbladder because the gallbladder function is connected to the Aquarian lines, the Aquarian energies. [1]

The 7D current locations in the planetary grid are currently undergoing a major overhaul as the Cosmic Elohei have returned into their Solar Dragon God body, to evict this extensive antichrist matrix connected into the Peruvian Gates along with the entities from Alpha Draconis running it. The announcement of the return of Emerald Order Elohei, reveals as their Cosmic Dragon Star Twinned Plasma Domes are now made visible two miles above the peak of Macchu Picchu and underground in the Earth. Cosmic Holy Father and his Plasma Dome embodied in the Aquarian Solar Dragon in the air element taking the northern position on top of Macchu Picchu, while his counterpart the Cosmic Mother Dragon and her Plasma Dome took the water element into the southern position, located about two miles underneath the crust in the planet’s aquifer system.[2]