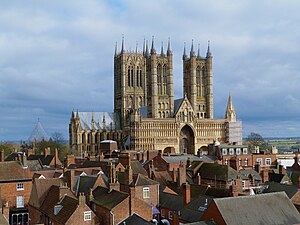 Lincoln Cathedral, Lincoln Minster, or the Cathedral Church of the Blessed Virgin Mary of Lincoln and sometimes St Mary's Cathedral, in Lincoln, England, is a Grade I listed cathedral and is the seat of the Anglican Bishop of Lincoln. Construction commenced in 1072 and continued in several phases throughout the High Middle Ages. Like many of the medieval cathedrals of England it was built in the Early Gothic style.

Although considered doubtful by some, many historians claim it became the tallest building in the world upon the completion of its 160 metres (520 ft) high central spire in 1311; if so, it was the first building to hold that title after the Great Pyramid of Giza, and held it for 238 years until the spire collapsed in 1548, and was not rebuilt. Had the central spire remained intact, Lincoln Cathedral would have remained the world's tallest structure until the completion of the Washington Monument in 1884. For hundreds of years the cathedral held one of the four remaining copies of the original Magna Carta, now securely displayed in Lincoln Castle. The cathedral is the fourth largest in the UK (in floor area) at around 5,000 square metres (54,000 sq ft). [1]

The opening of the central Azura point flows triple solar Mother-Father arc rays into the recent activations made in selected Cathedral architecture on the grids, such as Lincoln Cathedral in the United Kingdom, which has made significant progress in the igniting presence of star plasma domes. In Lincoln Cathedral and Lincoln Monument, the star plasma domes were further aligned with Sirius star gateways to bring corrections to the 6D Indigo waves and by making further connections with the 13th Solar Dragon King Christ Michael. This is meant to anchor and ground the true authentic Holy Father presence onto our planet, many of which are Christos Founder beings that came through the Sirius B portal system, and to remove those whom acted as his imposters.[2]