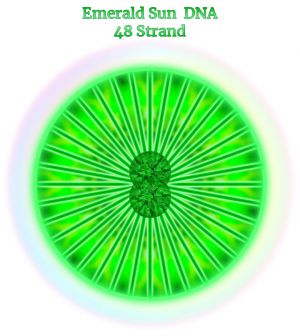 For those ascension protoypers in the Emerald and Blue Ray Rishic families receiving the Templar Reuche Codes, the entire twelve pillar clock shield configuration from the 1st God World Creation will begin to anchor itself within the core manifestation body of the personal 12 Tree Grid. Whereby the entire Cosmic Clock function of the twelve Reuche Pillars is anchored into the internal layers of the Lightbody and will begin to embody the entire instruction set within the individual’s DNA. This is the Emerald Sun DNA Activation that is ensconced within the Emerald Tree of Life as the Cosmic Clock Internal Templar. Those who embody the Emerald Sun DNA are Emerald Dragon Timekeepers in which the sphere of influence emanating from Emerald Order consciousness will collapse artificial or destructive fallen angelic timelines in those that are exposed to your radiating aura consciousness field.[1]

As we process the liberation of the Universal Melchizedek Logos during the June Solstice, this has greatly impacted the areas on the planet that had held some parts of the Emerald Founder Records. This has surfaced along with the particle records of Akashic and anti-particle records of the Ecoushic, as the Hall of Records which can appear like holographic bound books filled with information. Some of this information recorded in the books of record changes or is altered from each position in the dimensional field of which it is being viewed. During this phase, it seems the Melchizedek Logos and Emerald Founders are taking inventory of those records with the Maharaji groups in the Inner Earth. They are determining what is artificial and organic, and moving the organic held Founder records of our natural memory matrix to the safekeeping of authentic Cosmic Christos Suns, Blue Ray Melchizedek archivists and Emerald Dragon Timekeepers embodied on various organic timelines.[2]

The Cosmic Clock of the Templar Reuche in the Holy Father 12 o’clock position will anchor in the 8D center Azura point signifying corrected northern coordinate alignment through the holy spirit aqua-emerald flames that are merged within the sacred crystal heart. The Holy Mother 6 o’clock position will anchor into the 5D center generating the corrected navel position and appropriate southern alignment for building a strong base 6 grounding shield or full zero-point shield. The east-west alignments are the positions for building the Michael-Mary wings in which the 3 o’ clock position anchors into the 7D center and the corresponding 9 o’ clock position anchors into the 6D center of the personal12 Tree Grid. When the process for embodying the entire twelve Templar Reuche of the Cosmic Clock is complete, then the thymus gland ignites each of the pillars with small little Amoraea blue flames that turn into multiple arc fields that begin to lay the foundation for building the eternal Emerald Tree of Life into the instruction sets of the local grids that you are inhabiting. This is the function of Emerald Sun DNA in order to shift the planetary system away from artificial timelines and into organic timelines governed by the Cosmic Clock.[3]

The first emanation of the Primal Sound Field which represents the first individuation of the God Source is the Emerald Order. A part of the Cosmic Trinity. See Threefold Founder Flame.

The Emerald Order Oraphim have Emerald Sun DNA which is up to 48 strands of DNA.

Thuban star acted as the Guardian Dragon Eye of the Templar code on the Solar Logos plane that expressed the Law of Gender and was the protector of the cellular memories recorded in the timelines throughout the planetary grid system. The accumulative cellular memories of all consciousness lifestreams from the Amethyst Dragon Timekeeper histories are recorded in a series of geometric programs of living solar light language that forms into spherical shapes that resembles an apple. That geometric program carries the history of human origins in the Universe within a living light hologram and it is connected into the Albion Lightbody. This living light language fully surrounds the outer layers of the planetary sphere, forming into the solar light rays of silver and gold braids which generate the crystalline lattice of the Golden Apple.

Thus, the Draco constellation and Thuban star as the Guardian Dragon Eye was the protective mechanism of the solar logos language of living knowledge and its ray intelligence streams which contain the energetic content held within consciousness records in the Universal Time Matrix. This is the origin and meaning of the Golden Apple and eating from the silver branches of the Tree of Knowledge, as guarded by the Holy Mother’s Emerald Dragon King and Holy Father’s Amethyst Dragon King. Originally intended to decide if our crystal heart is pure enough to behold the majesty of God’s Universal language of living knowledge and become spiritually initiated into the holy truth of the Sacred One.

Return of Emerald Order (By Sequoia)

The Emerald Order God World Creation is the most ancient spiritual home of the Kristos Races. They are a family of Rainbow and Emerald Dragons which contain one of the Tri-Matrices of the Azurites, which are three 48 stranded matrices that hold a total of 144 dimensions.

The return of the Emerald Order through the Rise of Arthur in Albion brings on the next stage activation during the Electrical Peak cycle for reviving the Emerald Crystal Heart in the Earth, which includes the Solar Anointing of the authentic Christ Michael to restore his rightful kingship and Solar Dragon Line. This holds profound meaning as the return of the Solar Rishi usher in the benevolent and rightful Christos Solar Kings to planet Earth, in which the Rishi awaken them from stasis so they may begin to embody in matter to activate their Solar Dragon Line.[4]