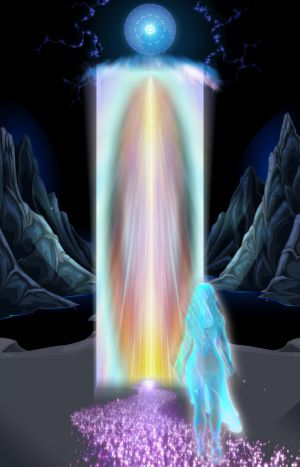 The God worlds are structured upon 12 pillars which bridge the Mother’s God-seed sound vibration into the lower creations, these pillars correct energy currents to run photonic and sonic healing frequencies that amplify and power up the Christos blueprint. These are the pre-sound and pre-light currents that source directly from the God Worlds and are collectively called the Reuche Pillars. The God Forces intertwine their consciousness with the instruction sets of the Cosmic Tree of Life (Kryst-Krystallah) and Cosmic Christos which forms into a set of 12 sound plasma pillars. At each location they are placed in the planetary body the sonic pillar transmits zero point which interacts with the sound waves and opens up a window that forms into the 13th Pillar, which is the Cosmic Amoraea wave which we refer to as Mother’s Aqua Portal. Mother’s Aqua Portal pulses living God consciousness in perpetual motion into the creation fields, circulating pulses of the eternal flame that is known as the Heart of God.[1]

The Override Pillar Gates or Reuche Pillars are from the God worlds that serve to stabilize the planetary merkaba shields, they were placed during the crisis intervention of Ascension Plan B. They help to hold energetic integrity of the grids through the capacity to run the planetary levels of the Amoraea blue flame, which is like saying the inner holy spirit activation in the earth body. They are to stop reversals of the planet that would allow for being sucked into a dangerous black hole or the Phantom Matrix. They act to bring down the higher divine Blueprint from the Universal layers all the way down to our lower density. They also have something to do with resetting or adjusting timelines and their sequences, restoring the cosmic clock setting to before we had the fall and invasion timelines of the NAA.