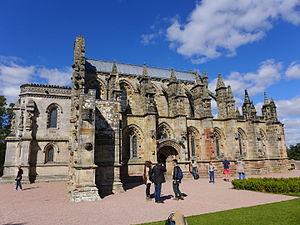 Rosslyn Chapel, formerly known as the Collegiate Chapel of St Matthew, is a 15th-century chapel located in the village of Roslin, Midlothian, Scotland.

Rosslyn Chapel was founded on a small hill above Roslin Glen as a Catholic collegiate church (with between four and six ordained canons and two boy choristers) in the mid-15th century. The chapel was founded by William Sinclair, 1st Earl of Caithness of the Scoto-Norman Sinclair family. Rosslyn Chapel is the third Sinclair place of worship at Roslin, the first being in Roslin Castle and the second (whose crumbling buttresses can still be seen today) in what is now Roslin Cemetery.

Sinclair founded the college to celebrate the Divine Office throughout the day and night, and also to celebrate Masses for all the faithful departed, including the deceased members of the Sinclair family. During this period, the rich heritage of plainsong (a single melodic line) or polyphony (vocal harmony) were used to enrich the singing of the liturgy. Sinclair provided an endowment to pay for the support of the priests and choristers in perpetuity. The priests also had parochial responsibilities.

After the Scottish Reformation (1560), Catholic worship in the chapel was brought to an end. The Sinclair family continued to be Catholics until the early 18th century. From that time, the chapel was closed to public worship until 1861. It was reopened as a place of worship according to the rites of the Scottish Episcopal Church, a member church of the Anglican Communion.

Since the late 1980s, the chapel has been the subject of speculative theories concerning a connection with the Knights Templar and the Holy Grail, and Freemasonry. It was prominently featured in this role in Dan Brown's bestselling novel The Da Vinci Code (2003) and its 2006 film adaptation. Medieval historians say these accounts have no basis in fact.

Thus, there have been evictions of many Black Magicians and Imposter Solar Christ identities, and the reclamation of Solar Christ genetics is occurring as the result of the Sun Disc Network connections being made into the Solar Logos. Additionally, there has been Guardian rehabilitation of the planetary heart network in the 4D-7D-10D Sun Disc networks and their relative Stargates, to remove the Artificial Tree of Life architecture from running AI Signal, black magic reversals and projecting black hearts into the planetary grid. Recent Guardian projects included the reconnection of the Giza Solar Gateway to the Hatshepsut Temple and the Rosslyn Chapel Sun Disc Networks, which acts as a Solar Gateway, and was integrated into the grid network for supporting 4D-7D axiatonal line vulnerabilities.

Rosslyn Chapel in Scotland connects into the Princess Scotia story, which reveals African roots in Irish timelines sourcing from Egyptian history, of those attempting to hide Atlantian artifacts and other important spiritual relics. Scotia, the Egyptian princess was said to be the daughter of a pharaoh who fled from Egypt with her husband Gaythelos with a large following of people who arrived in a fleet of ships. They settled in Scotland for a while amongst the natives, until they were forced to leave and landed in Ireland, where they formed the Scotti. Their kings became the high kings of Ireland. In later centuries, they returned to Scotland, defeating the Picts and giving Scotland its name.[2]

The Platinum Crystal in the earth is connected with the Sun Disc Network, and this activates stages of balancing for the feminine-masculine principle and the mental bodies. Connection with these crystalline frequencies will begin to heal anti-life reversal current, Metatronic Reversal and artificial signals of Mind Control. In the individual lightbody, the entire solar plexus area reconfigures the mental body layers into a Golden Solar Gate energy vortice, which is called the RA Center.

Recently the Sun Disc network has been highlighted during Solar Activations for this Summer Solstice, as a new Universal Layer of Paliadorian Solar Bodies have recently interconnected with the planetary Sun Disc network. Recent gridwork involving Guardian projects for Crystal Core Activation have highlighted underground crystal bed networks being activated through Easter Island to link with the crystalline energies that are connected to the Sun Disc vortices in Minas Gerais, Brazil; Lake Titicaca, Bolivia; Rosslyn Chapel, Scotland; Giza, Egypt and Uluru, Australia.[3]

Guardian host facilitated the hierogamic union of the Triple Solar God and Triple Solar Goddess through sequential Krystic divine Aether rituals, which began at the Chartres Cathedral Labyrinth with the Solar Eclipse on December fourth. Chartres Cathedral acts as the unifying architecture for the 7D Solar Dragon Wing of the Solar Dragon Queen, Mother Mary of Dragons, and Rosslyn Chapel acted as the 6D Solar Dragon Wing of the 13th Solar Dragon King or Solar Christ Michael of Dragons, in which they came together and unified as One Cosmic Rod and Staff on the Spine of Albion. This same configuration of Christos-Sophia trinity architecture with hierogamic merged Solar Dragon Wings was the foundation body from which the Golden Cities of Atlantis were originally built, which exists in spiral no time and spans multiple dimensions from Earth, Tara and Gaia. Earth, Tara and Gaia also hold this trinity architecture that represents the planetary consciousness of the Triple Solar Goddess united in the Albion Lightbody.For some with the Celtic coding, this time will bring on an intense lunar Transfiguration in the sacral areas shooting up the spine, in which the higher embodiment of the Solar Dragon Wings from Chartres and Rosslyn will appear to be holographically represented in the Lightbody. [4]