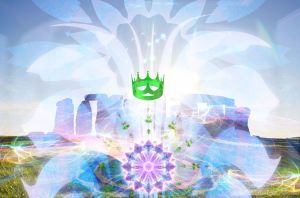 The Aquaferion Blue Feathers shield is to help clear out the Yahweh Matrix and Metatronic infection of reversal light coding in the Earth human 12 Tribes DNA coding and Tribal Shield. This appears to be rehabilitating the architecture in the planetary Albion body, in which the structure for the Spine of Albion has intersected with the Blue Feather host shield, into the Silver Sanctum in the Lyran platforms and then out of the Golden Gateway into the God Worlds. The elemental re-encryption change occurring in the Spine of Albion impacts the bone matrix in the Human 12 Tribes, which appears to release the 1D Death Seal and help to free the blood, bones and tissue from intergenerational blood covenants and inherited miasmatic patterns that were manifested from the alien genetic bonds and their modifications.[1]

The Albion is the androgynous human template created from the twelve spheres of the Tree of Life which, during the fall of humankind, became buried in the lower dimensional fields of the earth, waiting to be awakened. This elemental structure of the primordial human template is located in the earth body, and is made from the Original Cosmic Blueprint. This original Blueprint records the divine plan for humanities ascension to the Silicate Matrix and holds the celestial records of humankind’s evolution throughout the Solar System. The Awakening Albion occurs in progressive stages, and recent Sirius and Canopus star transmissions are intelligently designed to stimulate the higher mind activation throughout the Albion body in the earth. This gently accelerates the shift in the mental body of the earth to reflect the higher mind consciousness which is reflected in the stages of Awakening Albion.[2]

When the Rosslyn Chapel 6D portal and Chartres Cathedral 7D portal unified an activation of the holographic Emerald Founder Records occurred when an Azura Point for the Cosmic Emerald Crystal Heart birthed into the Spine of Albion and aligned with the Solar Rod of Ezekiel, making corrections to the positions held within the Cosmic Clock of the Aeons. The Spine of Albion wing activation opened into the Kantarian Dragon portal system from within the Azura portal, opening into 8D and beyond, further igniting the solar ouroboros lines of Maji Grail Kings throughout Earth, Tara and Gaia. This grid activation in the Albion began an opalescent krystal river flowing golden white fire plasma platonic solids for re-encrypting the planetary elementals and supporting corrections to the planetary rod horizontal Ley Lines to purge AI machinery.[3]