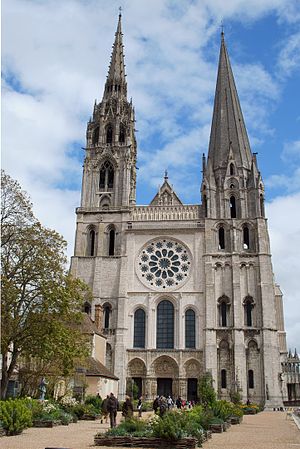 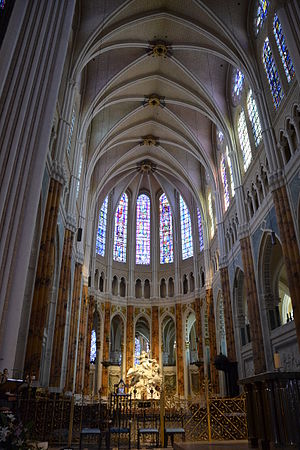 Chartres Cathedral, also known as the Cathedral of Our Lady of Chartres (French: Cathédrale Notre-Dame de Chartres), is a Roman Catholic church in Chartres, France, about 80 km (50 miles) southwest of Paris, and is the seat of the Bishop of Chartres. Mostly constructed between 1194 and 1220, it stands at the site of at least five cathedrals that have occupied the site since the Diocese of Chartres was formed as an episcopal see in the 4th century. It is in the High Gothic and Romanesque styles.

The cathedral is well-preserved and well-restored: the majority of the original stained glass windows survive intact, while the architecture has seen only minor changes since the early 13th century. The building's exterior is dominated by heavy flying buttresses which allowed the architects to increase the window size significantly, while the west end is dominated by two contrasting spires – a 105-metre (349 ft) plain pyramid completed around 1160 and a 113-metre (377 ft) early 16th-century Flamboyant spire on top of an older tower. Equally notable are the three great façades, each adorned with hundreds of sculpted figures illustrating key theological themes and narratives.

Since at least the 12th century the cathedral has been an important destination for travellers. It remains so to the present, attracting large numbers of Christian pilgrims, many of whom come to venerate its famous relic, the Sancta Camisa, said to be the tunic worn by the Virgin Mary at Christ's birth, as well as large numbers of secular tourists who come to admire the cathedral's architecture and historical merit.

The venerated Black Madonna enshrined within was Pontifically crowned by Pope Pius IX on 31 May 1855.[1] 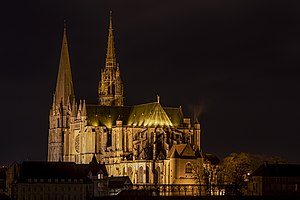 At least five cathedrals have stood on this site, each replacing an earlier building damaged by war or fire. The first church dated from no later than the 4th century and was located at the base of a Gallo-Roman wall; this was put to the torch in 743 on the orders of the Duke of Aquitaine. The second church on the site was set on fire by Danish pirates in 858. This was then reconstructed and enlarged by Bishop Gislebert, but was itself destroyed by fire in 1020. A vestige of this church, now known as Saint Lubin Chapel, remains, underneath the apse of the present cathedral. It took its name from Lubinus, the mid-6th-century Bishop of Chartres. It is lower than the rest of the crypt and may have been the shrine of a local saint, prior to the church's rededication to the Virgin Mary.

The momentous planetary initiation and personal transmogrification is occurring now through the return of the Holy Mother Sophia through her emanation as the Divine Solar Feminine Christos-Sophia within the Cathedral Activation and Aether Ritual that has taken place in Rosslyn Chapel, Chartres Cathedral and Lincoln Cathedral. She has risen! As she transmits her Divine Fire Water through sacred sound plasmas of the trine unifiers from the Ophiuchus constellation, she ignites the fifth element in the Ritual of Aether to bestow her blessings through the Azothian Sapphire Krystallah Sophia Crown.

Thus, Chartres Cathedral in France has an extensive history surrounding the hidden aspects of the Celtic Church and their Nazarene communities that came to take part in the initiation rituals hosted through Our Lady of Chartres, the Solar Dragon Queen Mary. [2]

Through the evocation of the beloved Holy Mother Sophia in her Solar Female Christos-Sophia emanation and by invoking her sacred Ankh mysteries, another section of her Triple Solar Goddess body was unearthed from the decaying dead elemental bindings and risen through the element of sacred divine fire water through the consecrated Cosmic Aether ritual. Thus, Guardian host facilitated the hierogamic union of the Triple Solar God and Triple Solar Goddess through sequential Krystic divine Aether rituals, which began at the Chartres Cathedral Labyrinth with the Solar Eclipse on December fourth. Chartres Cathedral acts as the unifying architecture for the 7D Solar Dragon Wing of the Solar Dragon Queen, Mother Mary of Dragons, and Rosslyn Chapel acted as the 6D Solar Dragon Wing of the 13th Solar Dragon King or Solar Christ Michael of Dragons, in which they came together and unified as One Cosmic Rod and Staff on the Spine of Albion. This same configuration of Christos-Sophia trinity architecture with hierogamic merged Solar Dragon Wings was the foundation body from which the Golden Cities of Atlantis were originally built, which exists in spiral no time and spans multiple dimensions from Earth, Tara and Gaia. Earth, Tara and Gaia also hold this trinity architecture that represents the planetary consciousness of the Triple Solar Goddess united in the Albion Lightbody.

Lady of the Lamps

Additionally, assorted holograms of the Seven Lamps that were being distorted in the organic Krystal Cathedral architecture from the artificial Armageddon Software is being replaced right now throughout the dimensional landscapes. The Lady of the Lamps Christos-Sophia architecture was buried underground in Chartres and in other Cathedrals and are being strictly guarded by the demonic creatures which must be evicted and delivered back to the Cosmic Mother as broken-down consciousness units. Lady of the Lamps are the female principle layers that are directly connected to the Ursa Major or newly christened Golden Bear constellation functions of the Universal Ray system, which are now being reflected in authentic hierogamic union of the Aeonic Pairings which act as the Cosmic timekeepers from the Orion Galactic Core.