As Cosmic Holy Father incarnated into the Emerald Order King Arthur Christos template, he brought with him the Emerald Rod codes for the Universal 12:12 Christos Male Electrical pattern manifested into the 11D Rod and Staff architecture as a planetary upgrade anchored into the Albion Lightbody. This raised the Michael family from 11:11 gateway protectors to begin to anchor within themselves the 12:12 Christ Electrical pattern, which opened the door for Solar Dragon Michael to finally awaken from stasis and take his rightful place as Solar Christ King in Heavenly Jerusalem. Heavenly Jerusalem is the same as a Krystal Cathedral, it is a holy architecture in the planetary grail body that holds the crystalline blueprint for Golden Cities, Golden Child Eggs, Dragon Eggs and Edenic Codes designed for achieving hierogamic union templating for birthing the Solar Male and Female Christ Consciousness.

The Emerald Order base shield holds the seven mansions from within the Krystal Cathedral or Heavenly Jerusalem which are the Golden Cities of eternal light that now protect the Emerald Heart of the World Soul. 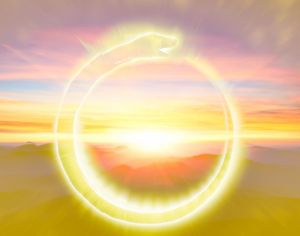 The Emerald Order carried out for witnessing in the planetary consciousness record the Solar Anointing of Christ Michael in the 2D Stargate, to lay the foundation of the Spirit of Perfect Peace in Heavenly Jerusalem.

Through the Solar Anointing carried out in the Grail Cup of Heavenly Jerusalem, Solar Dragon Christ Michael was placed on a golden throne and given the title of 13th Maji Grail King of Kings, to begin his mission of restoring the Holy Grail Cup in the 2D-5D-8D-11D layers and to initiate the awakening of the other authentic Maji Grail Kings.

The Rainbow Dragons would breathe the living holy spirit of the grail cup into his permanent seed atom so his Emerald diamond heart would pulse into the circuitry in Avebury, and then He would take his rightful place on the throne created for him in the White Temple of Solomon in Heavenly Jerusalem.[1]

The Sun is receiving a tremendous variation of solar streams in the form of highly refined electromagnetic frequencies from the Cosmic Founder Source Domains, directing plasma transmissions from the Pleiadian star system. These solar streams from the Pleiades are catalyzed by the return of Solar Christ Michael and Solar Christ Mary into dimensionalization, and are filled with Golden Cube Solar Codes that are transmitting activations to the human Crystal Body and DNA. During this phase, the solar coded streams are building the krystal holographic architecture to prepare for the density shift that is occurring soon which will radically change the base magnetism of the Earth and the Sun.[2]