Avebury Henge and the stone circles are in the heart of Wiltshire and have the greatest number of stones in Britain, even though many of the original stones were removed, their energetic purpose still remains as the etheric standing stones that complete the geomantic purpose of this sacred site’s intended function. The stones left standing are in different shapes and massive in size, megaliths that are about nine to twenty feet tall guarded by an Earth Dragon being. 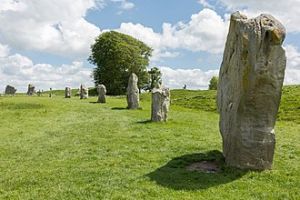 South Inner Circle of Avebury in May 2014 (wikipedia) 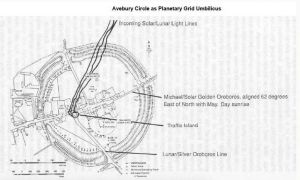 This area is an extremely ancient sacred site of immense power that is an important hierogamic architecture designed by the Elohim, Blue Ray Mother lineages, to awaken the Albion Lightbody worldwide. It functions similar to a cosmic umbilicus transmission point for the Cosmic Monad of the Holy Father in his Emerald Ray Arthurian Christos-Sophia consciousness in order to awaken themselves as the crowned King and Queen through the Albion Lightbody. Recently with the reclamation of the Gaian Matrix, the Christos Infinity Suns in the 8D portal are preparing the East-West ley lines to open the flood gates of the Solar Logos Rainbow Rays that further prepare for the Emerald Order DNA template. This activation of the Emerald Order template in the Avebury Umbilicus is directly connected to the reclamation of the Mother Sophianic consciousness in her Triple Solar Goddess aspect, the counterpart of King Arthur, who awakens to reclaim her parts that have been stolen and cloned, and to transfigure the lunar forces in which she has been bound. This sacred site is the record throughout all time of their sacred marriage and hierogamic union.

This sacred site is the connection point made with the Universal kundalini Taurus Dragon lines moving east and west on the planet, which connect directly with the Solar Logos, bringing vertical line connection to one of the four Royal Stars, Aldebaran the Guardian Star of the East ruled by Michael.

Hence the Avebury Henge is an ancient sundial that functions energetically like a giant Cosmic Clock to reset the timelines in the planetary grid network. Its Cosmic Clock function is the master time clock which holds access to the memories in the organic timelines recorded in human history going back to Hyperborea, which links back into the metagalactic core. The Cosmic Trinity of the Solar Rishi are completing their trinity wave braiding shield in this area to create a connection into the Avebury Henge, to bring forth the Heavenly Father and Heavenly Mother archetypal forces to unite with us all, nourishing and supporting the Cosmic Son and Daughter. The Children of the Sun rise beyond the tyranny of darkness under the divine kingship and guidance of the new Aeonic Pair, Christos-Sophia, which is crowned through Uranus and represented through the Arthurian hierogamic union generating perfect energetic balance between the masculine and feminine principle on the Earth, signifying the second coming of Christ. 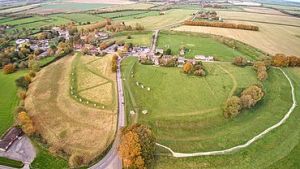 The Sirius and Canopus relationship with Avebury Henge are the DNA spiraled transmissions of the gold and silver braided energy of the unified masculine and feminine, which are designed to run this braided silver-gold current into the Michael-Mary lines in order to generate crystal heart twinning and lunar transfiguration. These silver and gold braided energies are streaming into this sacred site, playing the Musica Universalis which connects to King Arthurs Harp from Lyra to bring the Michael Mary lines into wholeness and resonance with this music.[1]