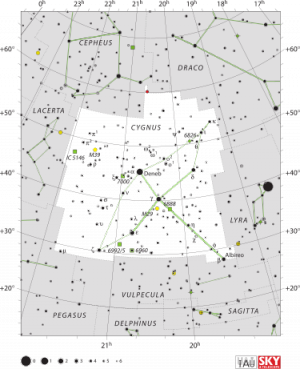 Cygnus is a northern constellation lying on the plane of the Milky Way, deriving its name from the Latinized Greek word for swan. The swan is one of the most recognizable constellations of the northern summer and autumn, it features a prominent asterism known as the Northern Cross (in contrast to the Southern Cross). Cygnus was among the 48 constellations listed by the 2nd century astronomer Ptolemy, and it remains one of the 88 modern constellations.Cygnus contains Deneb, one of the brightest stars in the night sky and one corner of the Summer Triangle, as well as some notable X-ray sources and the giant stellar association of Cygnus OB2. One of the stars of this association, NML Cygni, is one of the largest stars currently known. The constellation is also home to Cygnus X-1, an distant X-ray binary containing a supergiant and unseen massive companion that was the first object widely held to be a black hole. Many star systems in Cygnus have known planets as a result of the Kepler Mission observing one patch of the sky, the patch is the area around Cygnus. In addition, most of the eastern part of Cygnus is dominated by the Hercules–Corona Borealis Great Wall, a giant galaxy filament that is the largest known structure in the observable universe; covering most of the northern sky.

There is an abundance of deep-sky objects, with many open clusters, nebulae of various types and supernova remnants found in Cygnus due to its position on the Milky Way. Some open clusters can be difficult to make out from a rich background of stars.M39 (NGC 7092) is an open cluster 950 light-years from Earth that is visible to the unaided eye under dark skies. It is loose, with about 30 stars arranged over a wide area; their conformation appears triangular. The brightest stars of M39 are of the 7th magnitude. Another open cluster in Cygnus is NGC 6910, also called the Rocking Horse Cluster, possessing 16 stars with a diameter of 5 arcminutes visible in a small amateur instrument; it is of magnitude 7.4. The brightest of these are two gold-hued stars, which represent the bottom of the toy it is named for. A larger amateur instrument reveals 8 more stars, nebulosity to the east and west of the cluster, and a diameter of 9 arcminutes. The nebulosity in this region is part of the Gamma Cygni Nebula. The other stars, approximately 3700 light-years from Earth, are mostly blue-white and very hot.

The North America Nebula (NGC 7000) is one of the most well-known nebulae in Cygnus, because it is visible to the unaided eye under dark skies, as a bright patch in the Milky Way.Cygnus X is the largest star-forming region in the Solar neighborhood and includes not only some of the brightest and most massive stars known.

In Greek mythology, Cygnus has been identified with several different legendary swans. Zeus disguised himself as a swan to seduce Leda, Spartan king Tyndareus's wife, who gave birth to the Gemini, Helen of Troy and Clytemnestra; Orpheus was transformed into a swan after his murder, and was said to have been placed in the sky next to his lyre (Lyra); and the King Cygnus was transformed into a swan.

The Greeks also associated this constellation with the tragic story of Phaethon, the son of Helios the sun god, who demanded to ride his father's sun chariot for a day. Phaethon, however, was unable to control the reins, forcing Zeus to destroy the chariot (and Phaethon) with a thunderbolt, causing it to plummet to the earth into the river Eridanus. According to the myth, Phaethon's brother, Cycnus, grieved bitterly and spent many days diving into the river to collect Phaethon's bones to give him a proper burial. The gods were so touched by Cycnus's devotion to his brother that they turned him into a swan and placed him among the stars. 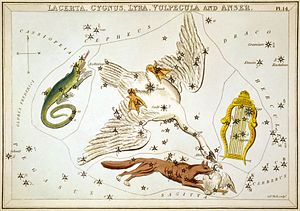 In Ovid's Metamorphoses, there are three people named Cygnus, all of whom are transformed into swans. Alongside Cycnus, noted above, he mentions a boy from Tempe who commits suicide when Phyllius refuses to give him a tamed bull that he demands, but is transformed into a swan and flies away. He also mentions a son of Neptune who is an invulnerable warrior in the Trojan War who is eventually defeated by Achilles, but Neptune saves him by transforming him into a swan.Together with other avian constellations near the summer solstice, Vultur cadens and Aquila, Cygnus may be a significant part of the origin of the myth of the Stymphalian Birds, one of The Twelve Labours of Hercules.