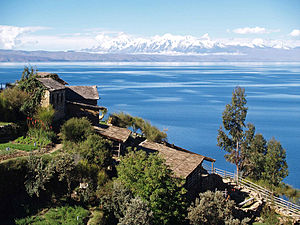 Lake Titicaca (Spanish: Lago Titicaca) is located on the border between northern Bolivia and southern Peru. It is considered the highest commercially navigable body of water in the world (3821m). 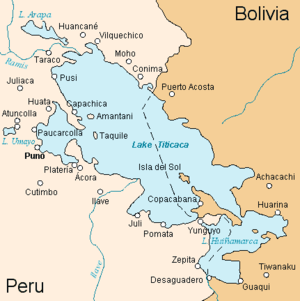 Covering some 8300 square kilometers, Lake Titicaca is the largest lake in South America, not counting Lake Maracaibo in Venezuela, which is connected to the sea by a strait. The area of the lake is divided between Peru and Bolivia. Approximately 60% of the lake is in Peru and 40% of the lake is in Bolivia. Most of the Tiquina peninsula, which just out from the Peruvian shore, also belongs to Bolivia.

Titicaca is the ancestral land of the Quechuas, Aymaras, Uros, Pacajes, and Puquinas. Lake Titicaca was the foundation of the most influential pre-Hispanic cultures of the Andean Region. Many independent kingdoms grew out of this fertile area beginning in the 9th century, though interestingly most of these kingdoms were ultimately rivals, until the middle of the 15th century, when the Incas conquered the region, which they considered important because of its wool and meat production. Today, Puno continues its vast agricultural traditions and also its ancestral rituals such as offerings to Pachamama (Mother Earth) and these ancient customs are ever-present in the lives of the inhabitants of the region.[3]

Many of the original Essene lines were trapped in the Planetary Gates and Astral Plane during the many cataclysms that occurred on the earth from NAA wars and Orion Group Invasion. In this Krystal Star Hosting Cycle we will retrieve and reclaim them. This is the Reclamation of the Order of the Christos.

With the Earth’s field weakened by inverted 7D violet current, the Black Sun Omicron Draconian races from Alpha Draconis generated an artificial wormhole on the 7D axiatonal line that connected with the 7D stargate in Lake Titicaca, Peru. This timeline trigger event occurred shortly after the Luciferian Covenant in order to compete with the Belial Groups planetary takeover agenda. This alien wormhole system, also known as the Phoenix and Falcon Wormholes, connected to Phantom Arcturus and was intended to link Omicron-Draconian-Rigelian genetic bonds with the Planetary Grid Network by ripping black holes in the space-time fabric and siphoning the planetary life force to be re-directed into Thuban.

The Peruvian Gateway 7D invasion includes the 5D Macchu Picchu Stargate linked underground into the Vatican, which further connects to the underground Atlantic Ocean Black Rose Harvesting Station for human and child trafficking in the underground tunnel and water systems. Many of the elites had private islands and submersibles, these are small watercraft that are designed to operate underwater and thus far away from prying eyes.

The 7D current locations in the planetary grid are currently undergoing a major overhaul as the Cosmic Elohei have returned into their Solar Dragon God body, to evict this extensive antichrist matrix connected into the Peruvian Gates along with the entities from Alpha Draconis running it. The announcement of the return of Emerald Order Elohei, reveals as their Cosmic Dragon Star Twinned Plasma Domes are now made visible two miles above the peak of Macchu Picchu and underground in the Earth. Cosmic Holy Father and his Plasma Dome embodied in the Aquarian Solar Dragon in the air element taking the northern position on top of Macchu Picchu, while his counterpart the Cosmic Mother Dragon and her Plasma Dome took the water element into the southern position, located about two miles underneath the crust in the planet’s aquifer system. [4]

The second stage of the Cosmic Dragon Awakening addressed the Peruvian gateways being controlled in Draco constellation and this occurred during the Lunar Eclipse on May 16th, 2022 which activated Holy Mother and Holy Father Dragon Nodes that intersected on the Isla del Sol in Lake Titicaca, Peru. The Cosmic Holy Father in his Amethyst God body emanated the Metatron Cosmic Lilac Sun and began weaving the Cosmic Christos Metatron Solar Dragon King God body into the 7D ley lines intersecting in Lake Titicaca and Macchu Picchu.[5]

Recently the Sun Disc Network has been highlighted during Solar Activations for this Summer Solstice, as a new Universal Layer of Paliadorian Solar Bodies have recently interconnected with the planetary Sun Disc network. Recent gridwork involving Guardian projects for Crystal Core Activation have highlighted underground crystal bed networks being activated through Easter Island to link with the crystalline energies that are connected to the Sun Disc vortices in Minas Gerais, Brazil; Lake Titicaca, Bolivia; Rosslyn Chapel, Scotland; Giza, Egypt and Uluru, Australia.[6]