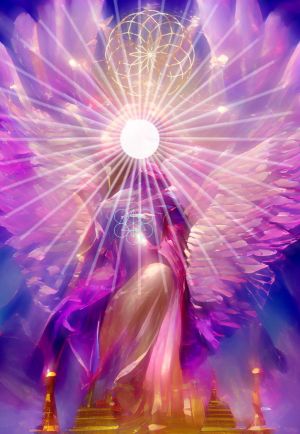 The second stage of the Cosmic Dragon Awakening addressed the Peruvian gateways being controlled in Draco constellation and this occurred during the Lunar Eclipse on May 16th, 2022 which activated Holy Mother and Holy Father Dragon Nodes that intersected on the Isla del Sol in Lake Titicaca, Peru. The Cosmic Holy Father in his Amethyst God body emanated the Metatron Cosmic Lilac Sun and began weaving the Cosmic Christos Metatron Solar Dragon King God body into the 7D ley lines intersecting in Lake Titicaca and Macchu Picchu.

The Cosmic Holy Father in his Amethyst God body emanated the Metatron Cosmic Lilac Sun and began weaving the Metatron God body into the 7D ley lines intersecting in Lake Titicaca and Macchu Picchu. The Metatron Collective are from the 1st God World Creation of the Emerald Order, and millions of years ago had become trapped in the Wesa tunnel and inverted through the AI entanglement technology, which was called Metatronic Reversal. Thus, the Cosmic Father is heavily involved in Metatronic body restoration to rehabilitate and heal all plasmic flowering expressions for reclaiming the organic Metatron family through their genetic bonds, being reconnected to the recently birthed Metatron Sun. These gorgeous pastel rays of pinks, lilac and periwinkles are the organic consciousness of the newly formed Metatron Sun as gifted from out of the Cosmic Father Pink Diamond Elohei, which include the sustenance for spiritually healing the masculine principles of the Mer lineages. Cosmic Father merges his Cosmic Pink Diamond Elohei Sun with the Cosmic Mother’s White Diamond Elohei Sun, and this further announced the sacred marriage between Metatron finally united with his beloved, Meritaten, the Queen of Dragons and speaker of TA Dragon tones. Beloved MeTAtron and his counterpart MeriTAten awaken to embody the sequences of the Christos-Sophia Solar Dragon aspects into direct unification with their Cosmic Holy Parents of the Emerald and Amethyst Order and return their organic Christos-Sophia consciousness to the Earth. [1]

The Easter Pearl Activation began the first of three events for Cosmic Dragon Awakening which included the birthing of a White Diamond Elohei Lyran Sun into 11D Aveyon and the reunification of the Triple Solar Masculine Christos template through the Cosmic Holy Father Rod Code, which forms the Universal Rod Trinity shield for Cosmic Christ Suns, Cosmic Christ Michael-Metatron-Melchizedek. The Solar Logos White Elohei Sun is the emanation of the Cosmic Mother Dragon of the 1st Emerald Sun, in which all of the feminine and masculine counterparts of Michael-Metatron-Melchizedek Solar Dragon family that were cloned or enslaved through the Alpha Draconis network are being recovered and reunited with their hierogamic partner via the Cosmic Emerald Order Ankh Body.[2]