[1]The fornix is a C-shaped bundle of nerve fibers in the brain that acts as the major output tract of the hippocampus. The fornix also carries some afferent fibres to the hippocampus from structures in the diencephalon and basal forebrain. The fornix is part of the limbic system. It has been demonstrated in humans that surgical transection – the cutting of the fornix along its body – can cause memory loss. There is some debate over what type of memory is affected by this damage, but it has been found to most closely correlate with recall memory rather than recognition memory. This means that damage to the fornix can cause difficulty in recalling long-term information such as details of past events, but it has little effect on the ability to recognize objects or familiar situations.

The fibers begin in the hippocampus on each side of the brain as fimbriae; the separate left and right sides are each called the crus of the fornix (plural crura). The bundles of fibers come together in the midline of the brain, forming the body of the fornix. The lower edge of the septum pellucidum (the membrane that separates the lateral ventricles) is attached to the upper face of the fornix body.

The lateral portions of the body of the fornix are joined by a thin triangular lamina, named the psalterium (lyra). This lamina contains some transverse fibers that connect the two hippocampi across the middle line and constitute the commissure of fornix (also called the hippocampal commissure).The terminal lamina creates the commissure plate. This structure gives existence to the corpus callosum, the septum pellucidum, and the fornix. The fornix splits into two columns at the front (anterior pillars), and then splits into two posterior crura. These two crura are joined together through the hippocampal commissure. The beginning of the splitting is called the psalterium or Lyra Davidis. The latter name is used because the structure resembles a lyra (or triangular harp): The two crura are the "chassis" of the lyra, and the commissure connections are the fibers.[2] 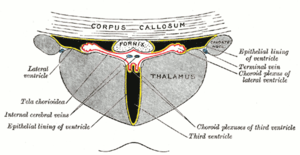 The limbic system is a set of brain structures located on both sides of the thalamus, immediately beneath the cerebrum. It has also been referred to as the paleomammalian cortex. It includes the olfactory bulbs, hippocampus, hypothalamus, amygdala, anterior thalamic nuclei, fornix, columns of fornix, mammillary body, septum pellucidum, habenular commissure, cingulate gyrus, parahippocampal gyrus, limbic cortex, and limbic midbrain areas. The limbic system supports a variety of functions including emotion, behavior, motivation, long-term memory, and olfaction. Emotional life is largely housed in the limbic system, and it has a great deal to do with the formation of memories.