Kolob is a star or planet described in Mormon scripture. Reference to Kolob is found in the Book of Abraham, a work that is traditionally held by adherents of the Mormon faith as having been translated from an Egyptian papyrus scroll by Joseph Smith, the founder of the Latter Day Saint movement. According to this work, Kolob is the heavenly body nearest to the throne of God. While the Book of Abraham refers to Kolob as a "star", it also refers to planets as "stars", and therefore, some Mormon commentators consider Kolob to be a planet.The idea also appears in Mormon culture, including a reference to Kolob in a Mormon hymn.[1] 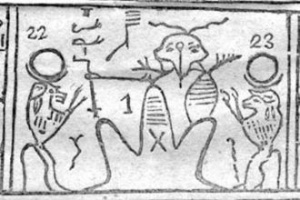 Detail of Facsimile No. 2 (the Hypocephalus of Sheshonq). Reference numeral 1 represents Kolob according to Joseph Smith. Critics interpret this as an altered figure of a creator god.

The first published reference to Kolob is found in the Book of Abraham, first published in 1842 in Times and Seasons and now included within the Pearl of Great Price as part of the canon of Mormonism. The Book of Abraham was dictated in 1836 by Smith after he purchased a set of Egyptian scrolls that accompanied a mummy exhibition. According to Smith, the scrolls described a vision of Abraham, in which Abraham:

"saw the stars, that they were very great, and that one of them was nearest unto the throne of God; ... and the name of the great one is Kolob, because it is near unto me, for I am the Lord thy God: I have set this one to govern all those which belong to the same order as that upon which thou standest."

In an explanation of an Egyptian hypocephalus that was part of the Joseph Smith Papyri, Smith interpreted one set of hieroglyphics as representing:

"Kolob, signifying the first creation, nearest to the celestial, or the residence of God. First in government, the last pertaining to the measurement of time. The measurement according to celestial time, which celestial time signifies one day to a cubit. One day in Kolob is equal to a thousand years according to the measurement of this earth, which is called by the Egyptians Jah-oh-eh." The Book of Abraham describes a hierarchy of heavenly bodies, including the Earth, the Moon, and the Sun, each with different movements and measurements of time, where at the pinnacle, the slowest-rotating body is Kolob, where one Kolob-day corresponds to 1000 earth-years. This is similar to Psalm 90:4 which says that "For a thousand years in [God's] sight are but as yesterday when it is past" and 2 Peter 3:8 which says, "one day is with the Lord as a thousand years". Additional, similar information about Kolob is found in the Kirtland Egyptian Papers, constituting manuscripts in the handwriting of Smith and his scribes.

According to the traditional, literal Mormon interpretation of the Book of Abraham, Kolob is an actual star or planet in this universe that is, or is near, the physical throne of God. According to Smith, this star was discovered by Methuselah and Abraham by looking through the Urim and Thummim, a set of seer stones bound into a pair of spectacles. LDS Church leader and historian B. H. Roberts (1857–1933) interpreted Smith's statements to mean that our solar system and its governing "planet" (the Sun) revolved around a star known as Kae-e-vanrash, which itself revolved with its own solar system around a star called Kli-flos-is-es or Hah-ko-kau-beam, which themselves revolve around Kolob, which he characterized as "the great centre of that part of the universe to which our planetary system belongs". Roberts was confident that this hierarchy of stars orbiting other stars would be confirmed by astronomers. The literal interpretation of Kolob as an actual star or planet had significant formative impact on Mormon belief and criticism, leading to conceptions such as that God dwells within this universe, and that the Biblical creation is a creation of the local earth, solar system, or galaxy, rather than the entire known physical reality.

In addition to the literal interpretation of Kolob as an actual heavenly body, the LDS Church has proposed that Kolob is also "a symbol of Jesus Christ", in that like Kolob, Jesus "governs" all the stars and planets similar to the earth. [2]

This is the text, From Key 6 OUR UNIVERSE WAS CREATED OUT OF THE "LIGHT SYNTHESIS" OF THE NEXT UNIVERSE, THE PLEIADES, THE CRADLE AND THE THRONE OF OUR CONSCIOUSNESS.

32 For from the Pleiades will come the cross of Redemption through the image of the Lamb of God. And the Lamb will be seated upon the Throne of God, and he will carry the sword of Light which will behead the energies of the fallen suns and all those who shout blasphemies against the Father, the Paradise Sons, and the Holy Spirit-Shekinah.

33 Thus, the Pleiades and Orion give the mathematics for every chemical sacrifice required in life from Genesis to Revelation. And at the end of our program, those who carry the image of the Lamb will be separated from those who carry the image of the Bear (Ursa Major) and the Dragon (alpha Draconis), the fallen spiritual powers controlling the old linear astronomy of the Babylonian sciences, forcing man to do homage to the lower heavens.

34 With a great rushing of thanksgiving, the Lords of Light will return the consciousness of the Overself to our human consciousness allowing us to break through the biochemical shells of this world surrounded by negative mass. Simultaneously, we will be gathered into the air to meet the Lord. This will allow our body vehicle to be judged both in terms of this world, as well as its affinity with the world of higher consciousness - the world of the Christ Body Overself.

35 Those who worship the Beast through their astronomy and astrology of the lower heavens and by their mathematical graven images of light are returned to begin their consciousness program once again.

36 Thus, we see the Pleiades as reflecting the mathematics of the Lords of Light in the creation of new star systems and sun systems.

38 This sixth key, then, shows how the higher lights can modulate the physical universe which is controlled by the force fields of '666' so that the pure thoughts of the Masters working with the '777' principle stars in the cluster of the Pleiades have the power to materialize a new heavens and a new Earth, so that the former things will not be called to mind.

39 At that time, the liberated body of Gematria will go beyond the '777' combination connecting the lower biological creation to become one with the Jesus Gematria of '888'. This liberated body, thus ascends into the higher Infinite throne worlds of the Father's Many Mansions which are liberated to reign with the Christ.

40 This tremendous power of the Godhead in the Name of YHWH resurrects even the kingdoms of Darkness. For at that time, the spirit of the Lord will no longer strive with Man, and the heavens of the Kolob shall be revealed to the Righteous Sons and Daughters of the Lamb who stand in awe of the Throne. And with the greater Wisdom of the Kolob the Righteous shall walk with God as Enoch, and God shall wipe away all their tears and they shall put on the Crown of Light, for they shall become the Lamb who has faithfully carried the Cross of Creation unto Salvation.

KOLOB: The Central Sun System which forms the center of the House of Many Mansions. It is used to transplant light creation from star systems of advanced intelligence into new complex evolutions.[3]